In 2009, when this site first began, and into 2012, I regularly posted a "cancel of the day".  A stamp was posted with a cancel for that day (except for the year, of course), and a bit of history was often given about the company or individual that applied the cancel.  That hasn't been done in years, partially because I haven't posted in so long, but also because I just stopped organizing posts around the dates of the cancels.

Today's stamp is a rather random stamp that fell out of a packet that has been in storage for over a decade.  The cancel is so clean that I figured I needed to feature it here, but it took me a couple of days before I realized that the cancel's date, March 17, was soon approaching and that I could run the first cancel of the day post in at least 7 years. 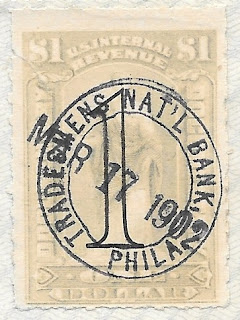 TRADESMENS NAT'L BANK,
MAR 17 1902
PHILA.
The stamp is on an incomplete document fragment.
I was getting ready to write about Tradesmens National Bank when I took a second look at the copy of R184 above and wondered about the color of this series of stamps.  Is this the color gray as Scott tells us it is?  I don't even see a gray undertone.  More like a light, yellow khaki or tan.  As a young collector I was confused by this color designation, and I still am today.  Whatever the case, this series of dollar documentary stamps, due to their color and size, are perfect backgrounds for cancels, partially explaining why so many stamps from this series are highlighted on this site.
Back to the point of today's March 17 cancel.  Tradesmens National no longer exists as a bank.  But it never closed;  it became part of a series of mergers that has led to the creation of PNC, the seventh largest bank in the United States, based in Pittsburgh, Pennsylvania.  In 1958, Tradesmens and Provident Trust merged to form Provident Tradesmens National Bank, thereafter through further mergers becoming today's PNC.
In a post from 2010, Provident Life and Trust Company was highlighted.  The focus of the post was on the dating style of the cancels they used, which employed Quaker style dating that did not used the romanized pagan names of the months, and instead used numbered months.  The stamp below was included in the post and is a good example of Quaker dating: 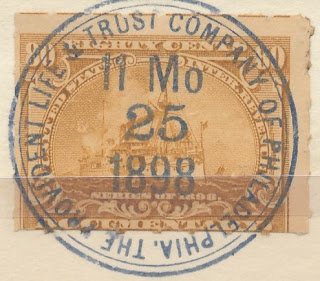 Posted by John Langlois at 1:00 PM