Where is Imperial Soap Company?

As the out of copyright material of libraries and other collections is rapidly digitized by Google, Microsoft and others, there are few individuals or companies of note from the 1898 tax period for which some sort of information or history cannot be found.  This web site emerged in early 2009 as digitization was gathering steam, and we've managed to take advantage of the ever increasing amounts of late 19th and early 20th century data to conduct cancel research.

Chappell/Joyce and other have identified the stamp with the rosette cancels below as that of the Imperial Soap Company of Boston.  The company's cancels, especially the one below, are hard to miss, and Imperial, by virtue of the types of cancels they were alleged to have used on their stamps, must have been a firm with some size.  Yet despite the trove of information available on the web, I can find nothing about the Imperial Soap Company of Boston.  Where in history did this company go? 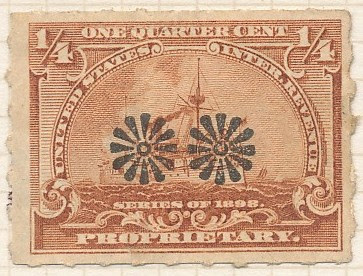 Most of the hits returned by Google for Imperial Soap Company today refer to firms having nothing to do with the 1898 Boston version of the firm, or refer to examples of the stamps you see above and below on various philatelic web sites.  So, if anybody knows anything about this firm, I would appreciate an email from you at 1898revenues@gmail.com.

Another issue has to do with the printed "cancels".  The cancels labeled type 2 & 3 below do not comply in any way with the rule regarding firm ID and date in the cancel.  Type 1 has the information, but just what was the company up to with the rosettes and the waves printed on the examples below?

In the recently mailed out edition of The American Revenuer, Ron Lesher unveils a cancel misidentified by our ancestors in the hobby, including Henry Tolman and Morton Dean Joyce.  This site has made similar discoveries of previously errant identifications.  Is Tolman's page correct or are their identification issues with these very distinct cancels? 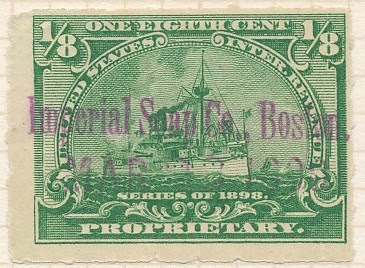 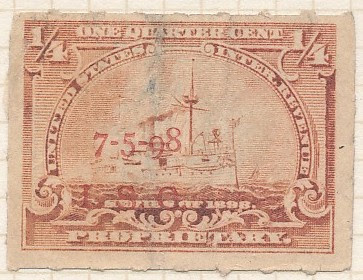 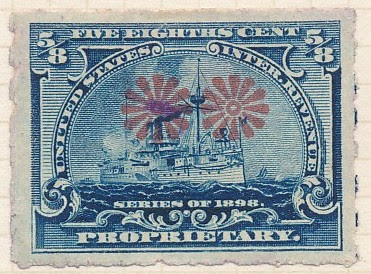 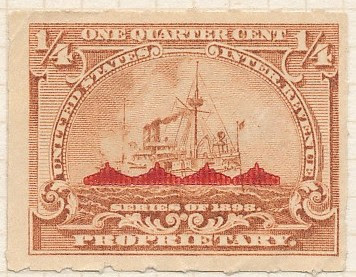 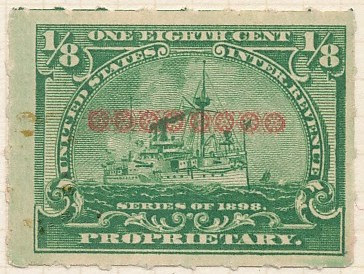 Unlisted printed cancel - is this an Imperial Soap Company cancel?  Tolman mounted this stamp on his Imperial page.