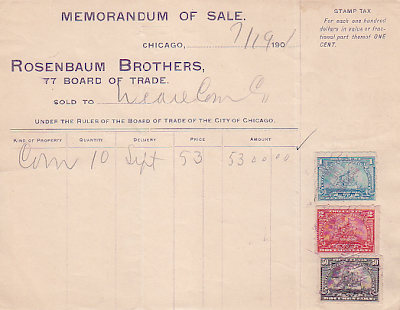 Memorandum of Sale for what appears to be 10 contracts of September corn @ $530 to Weare Commission Co.

From the History of Board of Trade of the City of Chicago, Volume 3, 1917:

Joseph Rosenbaum.--Actively identified with the Board of Trade for more than forty years.  Joseph Rosenbaum is not only one of the veteran and time honored members of this great commercial organization but also has the distinction of being a veteran of the Civil War, in which he manifested his loyaly to the Union and the interests of the land of his adoption by according to faithful and valiant service as a soldier in an Iowa volunteer regiment.

He is one of the vigorous men of affairs given our American republic by the Empire of Germany.  Ambition, resolute purpose and fine initiative and executive ability have represented the dynamic forces that have brought large success and benignant influence to Mr. Rosenbaum, and his President of the corporation of Rosenbaum Brothers, Live Stock Commission Company, which has long controlled a large and substantial commission business, besides which he is President of the Live Stock Investment Company and the J. Rosenbaum Grain Company, all of which are important commercial organizations of the great metropolis of the west.

It is interesting to record that in his extensive operations in the grain commission trade Mr. Rosenbaum now has as his able coadjutors his three sons, Emanuel F., who is vice-president of the Rosenbaum Grain Company; Edwin Stanton, who is treasurer of the company, and Walter Scott, who is assistant secretary of this spendid corporation, each of the sons as well as the father holding membership in the Board of Trade.