I like documents that bear combination usages; the more stamps the better! This one came in a job lot of stamped deeds purchased on eBay and actually it wasn't the main reason I bought the lot.  Happily though, it was included as it demonstrates a fine point about the 1898 tax law. 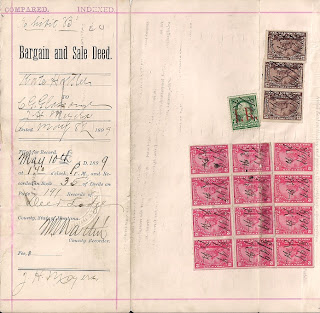 Hmmm!  That incongruity made me look more closely at both the deed and the stamps.  I noticed almost immediately that the upper two R169 25 cent battleships were a joined pair with the bottom single 25 cent stamp slightly overlapping them.  And the twelve R164 2 cent stamps plus the 1-cent I.R. overprint issue add up to another 25 cents. 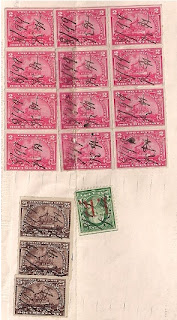 $1.00 tax paid by
three 25-cent, twelve 2-cent, and one 1-cent stamps
all initialed
8/99
K H
After reading the deed, it all began to make sense.  One Kate Hartlee is selling two lots in Deer Lodge Montana to C.G. Glass and J.H. Meyers.  I'll skip the boilerplate and go straight to the description:
"Lots numbered nineteen (19) and twenty (20) in Block numbered twenty (20) of the original townsite of Deer Lodge Montana according to the official plat and survey on file in the office of Clerk and Recorder of said Deer Lodge County, Montana.
It is understood by and between the parties to this instrument and deed, that the grantor hereby conveys unto each of said grantees an undivided one-half interest (my emphasis) in and to the said Lots 19 & 20 in Block 20 in the town and county of Deer Lodge Montana."
I can almost hear the justice of the peace before whom Kate Hartlee appeared to both sign and affirm the document:
"...Ah, well, hmmm, you know Kate , the way you have written up this here deed you've got two separate transactions going on and...well...ah... I think to be completely legal we have to tax each of them as separate transactions"
I may have unfairly put words in the mouth of the JP, but all of this does serve to illustrates the fine point that the documentary War Taxes were not levied against actual documents, but rather the transactions represented by or within those documents.  While there was but one deed, it represented two separate conveyances, each of which was subject to tax.  And the appropriate tax for two sales of property at $200 each would have been $1.00.
Back to the stamps.  I'm guessing the pair of 25-cent R169 battleships originally was affixed with the expectation that only 50 cents was going to be required, but when it instead was discovered that an additional 50 cents was required, and only one additional 25 cent stamp was at hand the parties scrounged up more commonly available 2 cent and 1 cent stamps to pay the remaining balance due.  Regardless of exactly how it all came about, it's an interesting document and a welcome addition to my collection.                  ﻿
Posted by Frank Sente at 11:14 PM