The subject line of the email read, "You're going to love this."  At first I figured it was going to be some funny video or just more of the politically incorrect humor that seems invade everyone's mail box.

Then I saw it was from fellow 1898 revenue collector Bob Patetta who often has contributed scans of documents in support of my posts on 1898 Revenues.  Bob had just read my recent post about the Port Costa Warehouse Storage Receipt and was sending a scan of another document related to G. W. McNear's Port Costa operations.  He was right, I loved it and I hope others will appreciate seeing it too.

This looks like a check and acts like a check, but instead it's an internal company pay voucher.  And it serves to confirm that Port Costa, at this time, essentially was G. W. McNear's company town!

When Port Costa was established in 1879 as the landing site for the railroad ferry Solarno, owned and operated by the Central Pacific Railroad, McNear bought much of the surrounding land and moved his grain warehousing/shipping operation there.  From his large land holding he laid out the town of Port Costa, donated land for a church, and founded the Port Costa Water Company mentioned on this pay voucher.

According an online biography, "...In addition to the business conducted as George W. McNear, Inc., Mr. McNear had other extensive financial and commercial associations. He promoted and was the president of the first electric street railroad, operated in the city of Oakland, and was also president of the First National Bank of that city. He also had extensive interests in Port Costa, being president of the Port Costa Water Company and Port Costa Milling Company....."

McNear also reportedly owned and operated more than 1000 acres of wheatland in various locations in California. And, although I have been unable to find specific reference to any mining operation, that the payee on the pay voucher shown above was a miner, suggests McNear must also have had some mining interests.

Looking closer at the voucher we see that it is payable by G. W. McNear, 326 California Street, San Francisco, one of McNear's known business addresses.  It reads,
Please pay Jno. Ganoque or order
Thirty seven and 50/100 Dollars
due him for services during the month of May 1898
and charge to account of Port Costa Water Co.
Worked as Miner

That's classic text for a company pay voucher.  Vouchers were commonly used to effect safe payments to employees of ranching and mining operations.  Rather than receiving a cash payment out on the range or at a remote mining site, an employee got a voucher signed by a local supervisor that they could turn in for payment when they next got to town.

In this case it appears Jno. Ganoque either transferred or perhaps sold his voucher to another party who in turn may have transferred or sold it to yet another party before it was presented for payment, as two endorsement signatures appear on the back.  Bob suggests that the payee Jno. Ganoque and Giovanni Ginocchio, whose signature appears first actually may be the same person. Given how immigrants' names often were treated at this time, he may well be right. 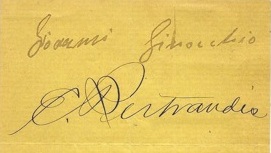 We'll likely never know for sure, but the signature of E. Bertrandis clearly makes it a three party payment and that additional third party transaction resulted in it being taxed.

As it was written on June 4, 1898, had it been presented for payment by anyone prior to July 1, 1898, the day the War Revenue Law of 1898 took effect it would have avoided taxation.  But it wasn't paid until July 12, 1898 although had Jno. Ganoque personally presented it for payment on that date, it still would not have been taxed as internal company pay vouchers were exempt from taxation provided the payment was effected directly to the payee.  In this instance, the prior transfer to a third party invoked the two-cent check tax as that was considered a separate "order" for payment, a taxable event.

The tax was paid by two R153s, the small I.R. overprinted one-cent Franklin definitive of 1897-1903 lightly tied to the voucher by faint illegible, but visible, green circular datestamps.  Their use adds significant interest to this document because, as noted in Bob Hohertz's article, "Where was R153 used?", in the May/June 2008 issue of The American Revenuer, on document usages of R153 are very uncommon!  Other usages from California, including another usage from San Francisco certainly help confirm their legitimate usage on this most interesting document.