A Warehouse Receipt from the San Francisco Bay Area

I thought I'd followup my blog about an ocean passage ticket from San Francisco with one about a Bay Area warehouse receipt.

The War Revenue Law of 1898 placed a twenty-five cent tax on "Warehouse receipt(s) for any goods, merchandise, or property of any kind held on storage in any public or private warehouse or yard, except receipts of agricultural products deposited by the actual grower thereof in the regular course of trade for sale."

Most of the warehouse receipts I've seen have been for the storage of whiskey or other spirits in a bonded warehouse.  In fact, this Port Costa Warehouse and Dock Company receipt for the storage of wheat is the only non-alcohol related receipt I have seen.  It's an over-sized document measuring 16" x 6 1/2" including the stub to which it had been repasted.  The image below showing the receipt fully detached from the stub is a paste-up of two scans.

As docketed on the back of the receipt, the wheat was stored in three separate warehouse locations:
It's written out on the front as: "Ten hundred ninety-eight thousand, eight hundred seventy-one pounds of wheat."  That's a lot of wheat, although according to one source the Port Costa Warehouses were capable of holding 60,000 tons (120,000,000 pounds) of grain.  So this deposit of wheat took up less than one percent of the warehouse's capacity.

View of Property of the Port Costa Warehouse and Dock Company

Probably from an earlier time the somewhat idyllic view above mostly shows rigged vessels rather than the steamships that likely filled the Port Costa harbor by 1898. 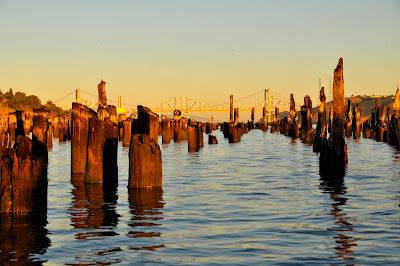 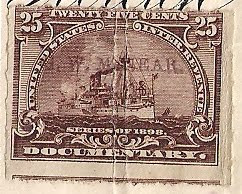 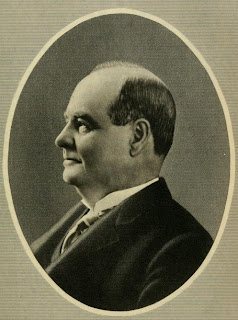 G.(eoge) W(ashington) McNear was born in 1837 in Maine to seafaring stock.  By the time he died in 1909 he was known as the "Grain King of California."

As a teen he left Maine for New Orleans and by age eighteen was the master of a sailing vessel and for six years commanded packets which plied in Mississippi Sound.  After a few years' residence in New Orleans he returned to Maine and then came to California arriving at San Francisco, August 2, 1860.

He became a partner of his brother, John A. McNear, in a grain business in Petaluma.  By the 1870s he had established his own grain business in San Francisco and by incorporating his knowledge of both shipping and grain became the largest exporter of grain in California for more than twenty-five years. At one time he was the owner of more than one thousand acres of wheat land in various parts of the state, while his warehouses at Port Costa were capable of holding sixty thousand tons of golden grain.

To read more of his biography from The History of San Francisco, California click here.

By the time this receipt was issued, the warehouse business was being managed by G. W. McNear, Jr. whose signature it bears.  The grain depositor is listed as Eppinger & Co., another grain export company.  The Eppinger firm later experienced financial difficulties and filed for bankruptcy in 1903.  Eventually its principals, Herman and Jacob Eppinger, were indicted for fraud.  Apparently they avoided conviction when evidence against them was destroyed by the 1906 San Francisco earthquake and fire.

Port Costa was founded in 1879 as a landing for the railroad ferry Solano, owned and operated by the Central Pacific Railroad.  McNear took advantage of the locale by buying property and building a 20,000 foot dock and warehouse operation that allowed him to load up to 10 ships at a time literally directly from grain cars.  He also laid out and developed the town of Port Costa.  Packed with both stevedores and railroad men it must have been a wild place in the late 1800s.

Today the wheat ships and train ferries are gone, but Port Costa remains a popular tourist destination.   Today, McNear's Port Costa headquarters building, built in 1897, is home to a trendy restaurant, the Bull Valley Roadhouse.
﻿
Posted by Frank Sente at 8:10 AM