A Conveyance Taxed $1,100 - Sale of the Parsons Paper Company

Yesterday we blogged about a bill of sale for the conveyance of some Indian Territory property that was sold for just $15 and taxed just 10 cents.

Today we consider the 1899 sale of the Parsons Paper Company, Holyoke, Massachusetts, the conveyance tax on which totaled a whopping $1,100!  Given that the tax on conveyances was 50 cents for property valued from $100 to $500 and an additional 50 cents for each additional $500 in value infers the Parsons company and property were valued at $1.1 million, although the sale price on the deed is given as "...in consideration of One Dollar and other valuable considerations..."

Even if property was given away, as with a quit-claim deed, the transaction, i.e. the conveyance of the property, was taxed at the property's real value. 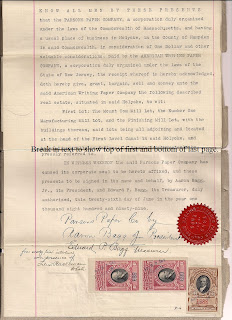 The deed was not recorded by the Hampden County Register of Deeds until a month later on July 26, 1899, a week after Aaron and Edward Bagg personally appeared before a justice of the peace on July 19 to have the document and their signatures certified.

The $100 R179 and the pair of $500 R180 tax stamps are dated July 25, 1899.  The purchaser, the American Writing Paper Company, a newly incorporated price-controlling trust coalition of thirty-two paper mills located in five states, paid the conveyance tax as each of the stamps bears a rubber handstamp cancel with the initials, Am. W. P. Co., plus the month and an abbreviated year date, JULY '99, prefixed with the exact July date, 25, in pen.  Usually, high value stamps also have cut-cancels, as an added security measure to prevent their reuse, but these stamps are all uncut.

This document brings to five, the number of on-document usages of the $500 Alexander Hamilton Portrait Documentary issue, this being the sole reported usage of a pair.

﻿
Conveyances are of particular interest because the tax levied upon them was based upon the value of the transaction rather than a flat fee as was the case for many transactions such as for checks, bills of lading, and numerous other taxed transactions.  So we see conveyance transactions taxed from ten cents to more than $1,000.  And deeds are fairly common as they were kept as important estate documents, not generally disposed of as were many other documents whose relevance or value did not continue beyond the completion of the transaction.

The Parsons Paper was founded in Holyoke, Massachusetts in 1853 by Joseph Clark Parsons.  Within a decade Parsons was the largest writing paper and envelope company in the country and Holyoke had become "The Paper City."  To read a brief history of the company visit this link to the Holyoke Public Library's online exhibit gallery.  The firm closed in 2005 and facility destroyed by an arson fire in 2008.