In March last year, Frank Sente published a post on an export bill of lading on the Louisville & Nashville Railroad for a shipment by the Luedinghaus-Espenschied Wagon Company.  Frank pointed out the rarity of export bills of lading and the reason behind the rarity in that post, and I recommend clicking the link to read Frank's contribution.

Today, however, we feature a stamp that likely came from a more common domestic bill of lading fromt the L. E. Wagon Company.  The stamp below is off document, but I am certain that I have a couple of L. E. Wagon BOLs from Henry Tolman's collection, with cancels similar to the one below, regrettably all in storage in northern Virginia, waiting for my return from Kenya.  For now, I will focus on the single below and the L. E. Wagon Company: 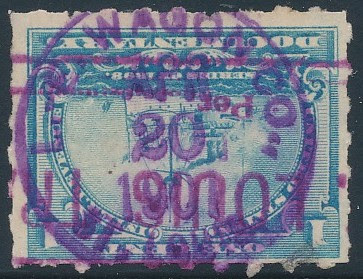 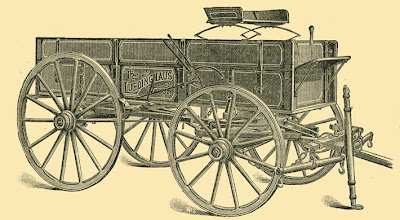 Luedinghaus-Espenschied, based in St. Louis, Missouri, built wagons of all types, including wagons suitable for travel out west from the gateway city of St. Louis.  L-E was manufacturing wagons by by 1850s, and they equipped 1000s trekking west to find new homes in the great expanse from the prairies to the pacific.

The Coachbuilt website provides the following background on Luedinghaus-Espenschied:

Louis and Henry Espenschied of 148 Broadway, St Louis, Missouri were German natives who first opened a St Louis blacksmith shop in 1843. They soon expanded to wagons and by the 1850s were making large numbers for pioneers heading west.

Henry passed away in the early 1850s, but Louis continued, renaming the firm the L. Espenschied Wagon Co. Mormon records indicate that for the great migration of 1853, the settlers purchased fourteen wagons for $58 apiece from Louis Espenschied in St Louis for their westward trek to the great Salt Lake. During the civil war Espenschied received a large contract for wagons and wheels for the Union Army.

Hanna F. Arensmann married a young carriagemaker named John Henry Luedinghaus on May 9, 1858 in St. Louis. Money was given to young John Henry from his in-laws to form the Arensmann-Luedinghaus Wagon Manufacturing Co. soon after.

By the 1870s both firms were specializing in heavy commercial and farm wagons and they decided to join forces in 1880 as the Luedinghaus & Espenschied Wagon Co.

Louis Espenschied died in 1887, but his sons and Luedinghaus kept the business going, which survived into the 1930s making heavy wagons, trailers, commercial bodies and motor trucks (Luedinghaus Truck of the 1920s).