William Mumford's firm in Chicago dealt in the pedestrian farm commodities of hay and animal feeds, and apparently provided for a comfortable and successful life for his family.  The nature of his business is a great example of the difference between the type of firms that used vast quantities of 1898 revenue stamps in Chicago versus those in New York City.  New York was the center of American capital and finance, and had large and numerous firms that traded in corporate equities and bonds.  The Chicago Board of Trade, however, was populated by many that were absorbed in the grounded world of the mid-western farm economy.  It is hard to imagine a man like J. P. Morgan even thinking about hay, much more doing business with it like Mr. Mumford. 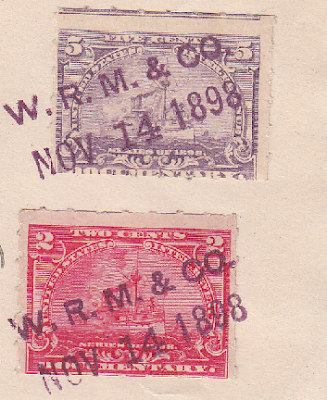 W. R. Mumford & Company was listed in the 1900 CBOT annual report as a Grain, Feed and Hay firm.  The staff included the following CBOT members:

From the February 1923 edition of the trade journal Flour and Feed:

Death has again invaded the ranks of the Chicago Feed Dealer's association and has taken away one of its most honored and highly respected members, William R. Mumford.  Mr. Mumford was one of the founders of the association and was its first secretary, which position he occupied fore several years, and it is due to his earnest work that the association succeeded and is today second to none in the country.

Mr. Mumford was a native of Pennsylvania, born in Wilkes Barre, March 5, 1842.  He came to Chicago about 1865 and at once entered into the hay and grain business and by industry and close attention to business soon established an extensive trade.

He organized the firm of W. R. Mumford & Company that year and in 1875 became a member of the Chicago Board of Trade and at his death was one of the oldest active members of that organization.  He was an active member of the Chicago Hay Receivers association and served one year as its president.  He was a most genial companion; always met you with a smile and hearty grasp of the hand.  never to busy to speak a pleasant word.

During the session of the National Hay association held in Chicago two years ago at the banquet given at the Drake hotel, he as referred to by the president of that organization was "the grand old man of the hay trade"...
Posted by John Langlois at 6:00 AM