The prominent Wall Street broker James H. Oliphant began 1898 as a member of the firm Lathrop, Smith & Oliphant.  Before the end of 1898 and by the time of the cancel below he was running a firm in his own name.  Mr Oliphant was shot in his office in 1907 by a client, who in turn turned his revolver on himself and commited suicide.  Mr. Oliphant died soon after in the hospital of his wounds.  See more below in the excerpts from a 1907 New York Times article. 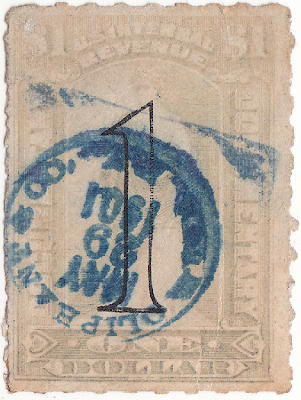 JAS. H. OLIPHANT & CO.
MAY
29
1901
N. Y.
David Thompson scan
The New York Times, December 21, 1907:
RUINED SPECULATOR KILLS J. H. OLIPHANT
Then Shoots Himself in the Brokerage Office of His Victim, Who Dies at 2 AM To-day.
FORTUNE OF $75,000 GONE
Dr. C. A. Gieger, a Southerner, in Firm's Debt, but Wanted Chance to Retrieve His Losses
James H. Oliphant, senior member of the Stock Exchange firm of James H. Oliphant & Co., and one of the best known brokers in this city, was shot, and mortally wounded in his office at 20 Broad Street yesterday afternoon by Dr. Charles a. Geiger of Beaufort, S. C., a ruined speculator, who for two years or more had been a customer of the Oliphant firm.  Dr. Geiger then turned the revolver on himself and sent the bullet into his brain, dying instantly.
Mr. Oliphant died in Hudson Street Hospital at 2:03 o'clock this morning...
The full 1907 New York Times story is a detailed and interesting tale of speculation and loss.  If at all interested in the story be sure to read it at the link provided.  Also in 1907, NYSE member William S. Alley committed suicide at the Larchmont Yacht Club due to trading losses.  A William S. Alley cancel and the story can be found in a blog post by clicking here.
Posted by John Langlois at 6:00 AM