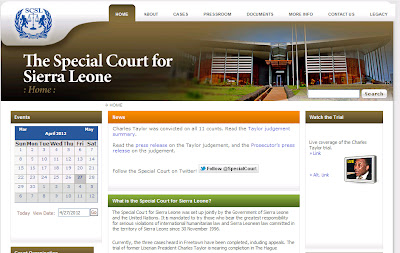 This post has nothing to do with 1898 revenues or stamps in general.  But it has much to do with my life and the life of my family.  I've spent 10 years in the West African states of Liberia and Sierra Leone, 8 of them with Taylor in ascendence and creating hell for all that lived in both countries.

Today is a great day, partially for reasons of justice, but mostly because Taylor will now be unable to gain his freedom and return to the West Africa region to destabilize it once more.  Taylor was found guility today at a court in The Hague in The Netherlands of aiding and abetting crimes against humanity on 11 counts.

I lost many friends to Mr. Taylor and his men.  I also spent years of life working to buffer the cruel effects of his rule and warlordism.  While neither Liberia or Sierra Leone will shake off the effects of years of coups and wars, in part led by Charles Taylor, they can now definitively be on the way to putting this terrible history behind them.

Taylor's sentencing process starts today.  You can access the Court's website by clicking here.
Posted by John Langlois at 3:07 PM