Here's an example of one Wall Street brokerage selling stock to another Wall Street brokerage; Hatch & Foote to H. Knickerbocker & Co.  When resold stock was taxed on its original face value at the rate of 2-cents per $100 or fraction thereof and not on its actual resale price.  That the sale of the 20 shares of Chicago, Burlington, and Quincy stock sold here at $105.875 per share was taxed 40-cents indicates the shares were originally valued at $100 each when issued.

That the transaction is dated July 18, 1898, while the dater cancel used on the stamps reads July 15, 1898, suggests the person in charge of taxing the company's sales memoranda wasn't careful about changing the date on his cancelling devise. 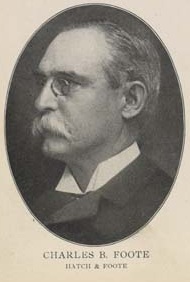 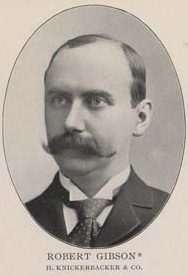 Charles B. Foote and David B. Hatch founded their business in 1867 as a banking and brokerage business.  Robert Gibson was the managing general partner of the limited partnership firm H. Knickerbocker &. Co.

Hatch served on the board of directors of several railroads over his career.  Below is a RN-G1 tax imprint check dated September 27, 1881 from the end of the civil war tax period issued by the Hatch and Foote firm on behalf of the Boston & New York Air Line Railroad  during a period when David Hatch served as its treasurer.

The firm also appears to have been active in the US bond market as evidenced by this 1879 postal card solicitation for the purchase of US Government 4% bonds and other bond transactions.  ﻿ 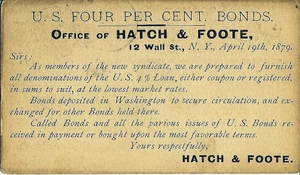 The firm failed to the tune of $2,000,000 and was suspended from the NY Stock Exchange in September 1900.  Hatch blamed Foote who he claimed was insane and had been speculating on both sides of the market without Hatch's knowledge, yet it was Hatch who had been executing the trades.  To read the New York Times' account of this strange debacle go here.   It's as interesting as reading about today's MF Global failure!