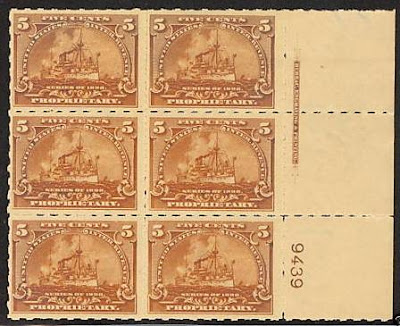 Unlisted by Scott 3 years ago, the battleship plate blocks now have a place in the specialized catalog.  No blocks are cheap; some are quite expensive and scarce.  The copy above currently being sold by Steve Wittig on Ebay is an example of the expensive and scarce.  He has set a starting bid over a thousand, and a buy it now for close to three thousand.

When the listing for this block first appeared in the 2010 specialized catalog, there was only a dash where a price should have been.  Now in the 2012 catalog, instead of a dash, there is a price of $1750, though the price is in italics, indicating a lack of robust market information.  What happened in the intervening 2 years?  In April 2010, Siegel sold a plate block of 12 of this stamp for $1900.  And sometime over the past 2 years a copy of this block for sale at Eric Jackson's website listed for $1500 was removed from his site.  It must have had a buyer.

So there is some demand for these blocks out there, though I doubt we are quite ready to have anybody willing to pay the buy it now price on the Ebay lot above.  Two years ago I wrote a full post on proprietary hyphen hole plate block values. Perhaps it is time to do it again.
Posted by John Langlois at 8:22 AM