Next week some of the greatest rarities from the 1898 revenue series will be put on the block by Robert Siegel in its auction of the Whitpain Bureau Issues collection.  Below are images of a few of the stamps to be auctioned.  Some of these appear very rarely in the open market, as with the Daprix overprint immediately below.  Siegel is also auctioning the Morton Dean Joyce collection of Dr. Kilmer & Company overprints, which was sold to Mr. Whitpain in a private sale by Mr. Joyce.  Joyce literally wrote the book on the Dr. Kilmer overprints in "The Case of Dr. Kilmer's" which was published in 1954 and serialized in The Bureau Specialist (now the US Specialist) in 1957.

Anyone can view the complete auction of the Whitpain Bureau collection by going here: Siegel Whitpain Auction.  Below are a few examples from this sale. 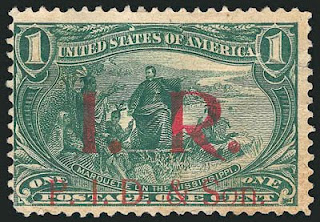 Perhaps the greatest rarity of all the 1898 revenues, Scott R158B above was overprinted for the use of P.I. Daprix and Son for use on its steamboats that operated on the Erie Canal.  There are only 3 recorded examples of this stamp.  The stamp catalogs for $32,500 used.  As such this stamp is rarely available in the market. 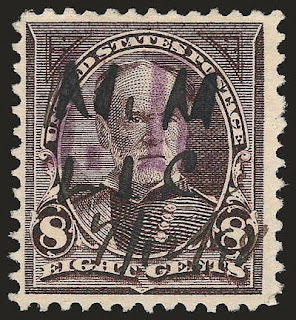 Scott lists R156 above as nearly an afterthought.  After extensive and detailed listing for the overprinted 1 and 2 cent postage stamps of this series are listed R156 through R158, and only in used condition.  All are priced in the thousands.  R156 above currently catalogs for $5,750.

In George Sloane's column in Stamps for July 31, 1948, Sloane reported that the Michigan Mutual Life Insurance Co. handstamped copies of the 8c, 10c and 15c regular issues over a period of five days in July 1898.  In the stamp above the manuscript writing (MMLIC + date) was made by Michigan Mutual.  Less clear is the "I.R." surchage in magenta.

What a fabulous plate and imprint strip of R159.  The top stamp is the "ocumentary" variety, as it is missing the D.  And the strikes from E. Smathers & Company are perfect.  The strip is priced at $600 by Siegel but should bring much more. 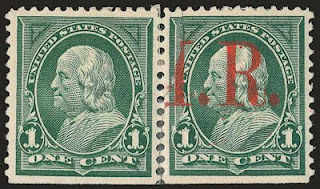 This happened on the 2 cent variety as well.  Unfortunately, the right stamp has a large tear, but the pair is probably unique, as the stamp with no overprint on its face is overprinted on the back.  The Scott value for a pair, one without overprint, is $10,000. 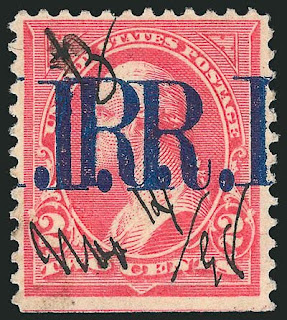 Lastly, here is a unlisted variety of R155, with two overprints, including one that is split with the once adjoining stamps.

I don't have the wallet for most of the stamps above, but its great to see them come to market.  After the sale I will review the prices realized for the stamps above.  Lets see how popular these 1898s are.

Over two years ago, when Siegel conducted the Tolman sale that included 1898 documentaries and battleship proprietaries, they sold intact Tolman's collection of J. Elwood Lee printed cancels and ancillary material.  The collection sold for $4,250, even though Siegel listed the range for the collection as $1,500 to $2,000.  While the economy might get in the way, I expect Joyce's Dr. Kilmer material will sell far above the $10,000 to $15,000 range listed by Siegel.