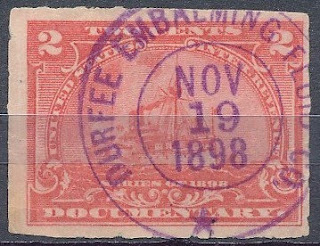 Allen Durfee (deceased), the pioneer funeral director and embalming fluid inventor of Grand Rapids, Mich., was born in or near Palmyra, Wayne county, N.Y., January 15, 1829, and lived on the farm on which he was born until 1853, when , on October 5th of that year, he married Miss Phebe B. Thayer, who was born in the same county of highly respected parents. To this union was born one child-a daughter---who died young. On the 8th of October, 1853, Mr. Durfee brought his bride to Michigan and located about four miles below the city of Grand Rapids (if city it might then be called), buying a part of the Bernis farm. While there engaged in agricultural pursuits, Mr. Durfee became very popular with the republican party, whose principles he had imbibed before leaving his native state, although, as a party, republicanism had not then assumed tangible organization. In 1856 he was elected a justice of the peace, and in 1862 and 1863 served as treasurer of Walker township, and in 1866 was again elected justice of the peace, In 1868 he was nominated for supervisor, but failed at the polls, his competitor carrying the day by a meager majority. In September, 1868, Mr. Durfee sold his farm and came to Grand Rapids, purchased a home, and in June, 1869, engaged in the manufacture of funeral goods, with J. H. Farwell as partner. Two years later, or on October 15, 1871, Mr. Durfee engaged in the undertaking business on his sole account, and began the manufacture of a preparation of his own for use in the preservation of the dead, his place of business being in the Ledyard block on Ottawa street. In 1889, A. D. Leavenworth was admitted as a partner in this business, which was pushed still more vigorously than ever. It was through the efforts of Mr. Durfee that the association of Funeral Directors of Michigan was formed, and from and after which sprang similar associations in many other states, which were allied into the National association of Funeral Directors, which in now vigorous association, holding annual meetings in different portions of the Untied States, and of which national organization Mr. Durfee served as president. This brought him in close fellowship with all the funeral directors of the Union, and as he was known to be a "pioneer" embalmer and used a preparation that had perfect operation, his advice was sought, as well as the preparation he manufactured for his own use, and, always being alive to the demands of the trade, he manufactured his embalming fluid on a large scale, and the business grew to such proportions, even without advertising or any efforts on his part, that, about 1886, A. W. Brown, who was then employed as embalmer and assistant undertaker, was put upon the road to introduce the Durfee Embalming Fluid among undertakers who had already learned of its superior qualities through personal contact. From that time on the business was pushed with judgment and vigor, the company employed four traveling men, covering the entire United States. Besides that manner of sales, the company sold its goods through seven commission salesmen and fifty-seven different casket companies in various cities of the country. In 1889, Alvah W. Brown, who had been so successful in sales of the Durfee Embalming Fluid, purchased an interest in the business, and gave his entire time to the manufacture. Up to December, 1893 Mr. Durfee and his partner in the undertaking business, A. D. Leavenworth, were the members of the partnership, and then the company, reorganized and incorporated, removed from the building used by Durfee & Co., undertakers, to more commodious quarters and in its own building on Spring street, and the business thereafter was carried on under the style of the Durfee Embalming Fluid company until the death of Mr. Durfee, which occurred May 25, 1897. In upwards of twenty-eight years in the undertaking business, Mr. Durfee had charge of over 28,000 funerals. He was also very fond of bric-a-brac and was great curiosity hunter, and his widow has still in her possession his cabinet filled with geological and conchological specimens and other curios, including whales’ teeth, horns of wild animals, etc., all of which latter he himself polished or otherwise prepared. He was kind and amiable in disposition and extremely affable and courteous in deportment, and of broad mind, liberal views, and sympathetic instincts. Fraternal with all mankind, he enjoyed the society of his fellowman, and sought his companionship by becoming a member of several societies, among them the Knights of Honor, the Ancient Order of United Workmen the Covenant Mutual association of Galesburg. And of the Old residents association of the Grand river valley. He was charitable and benevolent, and a true Christian in thought and deed, and died a member of the Park Congregational church. His loss was deeply mourned by the community of Grand Rapids, but none more deeply deplored him that his bereaved widow.