On Beyond Holcombe: A. L. Calder 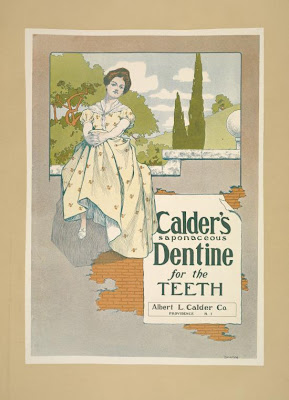 Albert Lawton Calder staked his claim to fame on the tooth cleaning compound Dentine. In an age devoted to praising American ingenuity elaborately, graciously and generously, the exhibit of the company bearing his name at the Jamestown Exhibition of 1907 was thus lauded:

An artistic corner was reserved for the exhibit ... . The superlative qualities of this dentifrice were advertised in a quaint and unique way.

Calder’s Saponaceous Dentifrice, prepared by Albert L. Calder, was the first tooth powder made in this country, and was the first to attain national and foreign sale; it was, therefore, peculiarly appropriate that it should be exhibited at the Jamestown Exposition. Dentine has always been manufactured with the same care used in putting up prescriptions , and it has justly enjoyed such a reputation - since first manufactured in 1850 - that many tooth powders since placed on the market have aimed at equaling in its purity and quality, but none have [sic] succeeded so far. 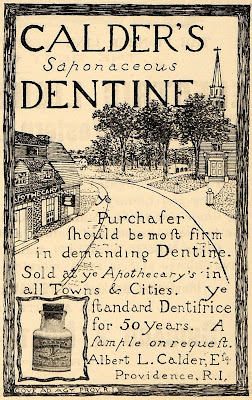 This substance was always described as “saponaceous,” which means, essentially, soapy. Precisely why it was “saponaceous” is unclear, but perhaps the term was meant to emphasize that it was neither gritty nor abrasive. Apparently, Calder’s product was prepared legitimately in a non-toxic manner and never seems to have run afoul of the Pure Food and Drug Law crusaders. Judging by the frequency with which the cancel appears today, it must have been extremely successful in its time. 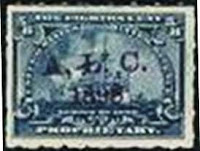 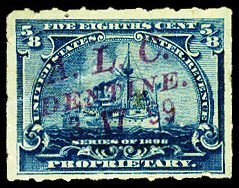 
A. L. Calder, born in Providence, Rhode Island in 1825, opened a retail pharmacy there in partnership with Joseph Balch in 1842. Between 1848 and 1850, he worked in Boston for Seth W. Fowle, later of RS 91 fame. In 1850, he returned to Providence and, in 1851, opened a retail pharmacy with his brother George, who two years later shifted his attention to his own broader wholesale drug, chemical, paint and dye business. Albert continued the retail pharmacy until 1886, and, in fact, a Calder cancel has been identified on the earlier governmental proprietary issues. Albert was an original member of the Rhode Island Board of Pharmacy, as well as its President from1870 to 1885, and also acted as President of the newly formed local Providence pharmaceutical association when it organized in 1874. Yet Calder gave ever increasing attention to marketing his own brand, and finally closed his retail business entirely to devote his time to the manufacture of Dentine.

In 1890, he acted his firm’s representative to the National Wholesale Druggists Association meeting, and, at some point, subscribed his company to the NWDA’s plan to control retail re-sale prices which was finally declared illegal as a violation of the Sherman Anti-Trust Law in 1907. As a staunch Republican, he also participated in local government and other civic endeavors. In 1879, he became a director of the Providence Athenaeum, the city’s library. At his death in 1899, he was lauded as a leader and benefactor of his Unitarian Church for more than forty years, and praised for his continuing dedication to church and civic causes. George, apparently less civically minded, closed his wholesale business and retired in 1900. He died at age 86 in 1916.

A L Calder appears to have been succeeded in the manufacturing business by his son, A. L. Carter 2d, and the business continued to flourish. In 1908, the year the company incorporated, the national printing trades magazine reported that the Calder company’s entire advertising budget was being channeled into streetcar advertising to the detriment of magazine and newspaper advertising. By 1912, the Company had moved to a new location and was operating as both the Albert L Calder Co and the Calder Dentine Co. In 1921, the Calder Dentine Co re-incorporated, lasting as a pharmacy supply house until 1937 before finally ceasing business in 1938.

The Calders must have traveled among the elite of Providence. In 1902, a miniature portrait of Mrs A L Calder was lent by its painter to a display of “Fair Women” sponsored by the Copley Society at Copley Hall in Boston Mrs Calder and her daughter-in-law were both listed in the 1905 Providence Society Blue Book as members of the Providence Art Club. Mrs Calder was listed as a visitor to the fashionable and posh Battle Creek Sanitarium in 1908, and Mrs Calder 2d served as a General Vice President of the National Daughters of the American Revolution in the early 1920s. 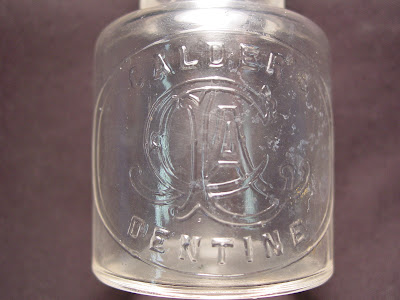