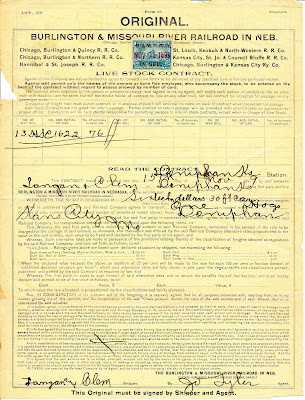 Contract for hauling a load of livestock on the Burlington & Missori River Railroad in Nebraska listing the corporate family of associated railroads including the:

The one cent documentary tax stamp contains a B&MRRR printed cancel from 1899.

The contract was for the shipment of 76 head of livestock from Doniphan, Kansas to Kansas City.  Doniphan was on the B&MRRR in Nebraska mainline.

Railroads were often used at this time to move livestock on the hoof to processors in big cities like Omaha, Kansas City, and Chicago.  The processors would then ship dressed meat in refrigerated or iced train cars, often referred to as "reefers".