David Thompson and I have begun to work with a listing of members of the Chicago Board of Trade (CBOT) from the 1898 tax period that can be found in an annual volume called:  "Annual Report of the Trade and Commerce of the City of Chicago."  These were published for generations, and can be found for the years 1898-1902 and beyond, even as ebooks through Google and downloadable as free .pdfs.

Futures contracts required tax stamps, though the level of taxation didn't require the use of dollar values on most contracts.  Battleships predominate, and a large number of the battleship stamps that can be found in collections were cancelled by CBOT members.  Today is the first example, cancelled by the firm Charles E. Gifford & Company.

In 1900, the listed members of the CBOT from the Charles E. Gifford firm include: 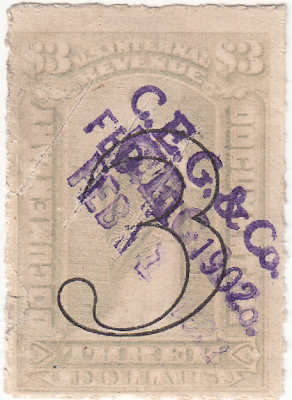 Above is one of the few dollar commerce stamps we have found that was likely used on a CBOT transaction.  This stamp was included in a post of unknown cancels.
Posted by John Langlois at 6:00 AM