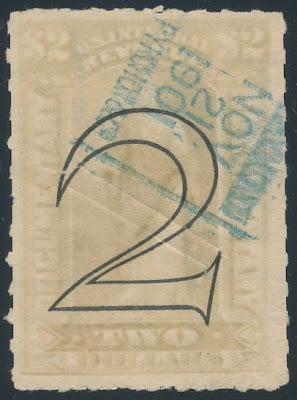 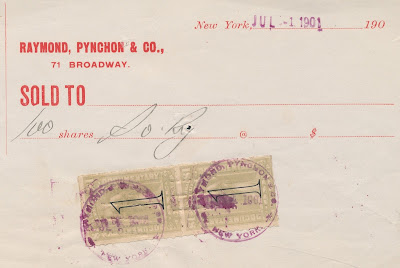 Stock memorandum of sale from Raymond, Pynchon for 100 shares of Southern Railway 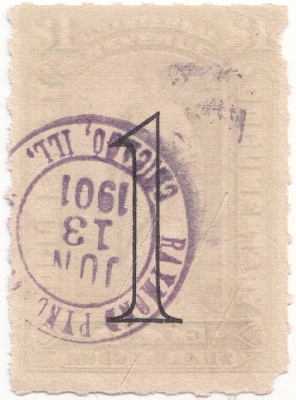 Raymond, Pynchon also traded on the Chicago Board of Trade.  Staff with membership in the CBOT included George M. Pynchon, #5422.

Raymond, Pynchon, though a loyal tax payer in the Southern Railway transaction above, was charged by the New York State Attorney General in late 1910 for reusing cancelled New York State tax stamps.

Attorney General's Office Investigating Other Cases--Member of Firm Says That Charge Is Untrue.

Frederick C. Tanner, Chief Deputy Attorney General in charge of the New York City offices, announced yesterday that he had instituted a suit against the brokerage firm of Raymond Pynchon of 111 Broadway for amounts aggregating $180,000 representing fines for using cancelled stock tax stamps.

Every brokerage house is compelled by law to attach transfer tax stamps to the memoranda of sales representing business transacted on teh Stock Exchange at the rate of 2 cents for each $100 of par value.  The number of stamps sold by the State runs into the millions each year.  The Controller's office has complained that brokers' clerks and office boys have been cheating the State and their employers by using stamps after they have been cancelled.  The Controller's detectives have found several times in the past a consideratble traffic in cancelled stmaps and have contended that these have been used in place of new ones.  Each stamp is supposed to be cancelled by the broker as soon as it is attached to a bill of sale, and a fine of $500 is provided for the use of cancelled stamps.

When the tax was first imposed five years ago the method of cancelling these stamps was by initialling them in ink.  This method was changed to a punch system, each stamp having a series of perforations punched in it after being used.

The $180,000 which the Attorney General's office seeks to collect from Raymond, Pynchon & Co. represents the fines on 300 stamps bearing Raymond, Pynchon & Co.'s perforation which the authorities will try to prove had been used a second time by that firm.  These stamps, it was said, had been doctored by pasting paper on their backs, corresponding in color to the face of the stamp, in order to hide the perforations.

Attorney General Tanner will conduct the case for the Controller's office, and said yesterday that other brokerage firms were being investigated and that more suits would soon be filed.

Harry Raymond, head of Raymond, Pynchon Co., said last night that the charge had used cancelled stamps was not true.  He said that it was impossible, either by carelessness or dishonesty on the part of clerks for such a thing to happen, as the stamps were purchased in sheets under responsible supervision.

He explained that while the Deputy Attorney General might have doctored stamps in his possession, they had gone out of Ryamond, Pynchon & Co.'s office properly cancelled on the original use.  The firm was not reponsible for what may have happened to the stamp after the sales slips went into the possession of third parties.  He said he expected to have no difficulty in disproving the charge.
Posted by John Langlois at 6:00 AM