On Beyond Holcombe: Daggett & Ramsdell 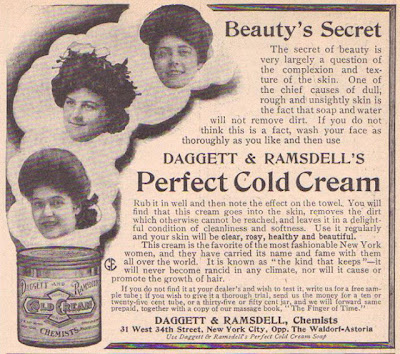 Daggett & Ramsdell, a skin care products provider, can be reached on the Internet, and maintains a website ready to sell its beauty products. Today, it offers a variety of creams and fillers to shade, plump and tone the skin, but the company’s history began with a revolution in the manufacture of cold cream. Volney Chapin Daggett and Clifford Ramsdell were both born 1859 and both graduated from the Massachusetts College of Pharmacy, Ramsdell in 1882 and Daggett in 1885. They opened a retail drug store in New York City as partners in 1890. At that time, pharmacists were trained to compound themselves many of the decoctions and elixirs they sold, including cold cream for women. Daggett and Ramsdell found that women’s cold cream, then made with a vegetable oil base, soon went rancid on their store shelves. In fashion industry lore, Daggett is acclaimed as the man who produced the first stable and long-lasting cold cream by substituting mineral oils for vegetable oils. The rest, as they say, is history.


When the company later trademarked its mineral oil based cold cream under the retail brand name “Perfect,” it claimed it first had used that name in 1893. For a period of years beginning in 1897, Ramsdell pursued his own interests, starting with an extended tour of Europe, and later worked in Newark and Chicago, ending with his formation of the Ramsdell Drug Co. During the Spanish-American War, Daggett was operating a drugstore on lower Fifth Avenue. In January,1902, the company expanded its product line to include “Perfect Cold Cream Soap,” and by 1907, had transitioned entirely from the drugstore business to the cosmetics business. Ramsdell later rejoined Daggett & Ramsdell, but died in 1911.

Daggett continued to lead the company from success to success, adding face powders as a product line beginning in 1913. Apparently just before the stock market crash in 1929, Daggett shrewdly sold the company to Standard Oil Company of New Jersey, who marketed Daggett & Ramsdell products through its subsidiary, Stanco Distributors, Inc. Daggett himself, who remained only a director of the company after the sale, outlived both his wife and only child, dying at age 84 in 1943. The company, under new management as a subsidiary of Standard Oil of New Jersey, apparently gained ground during the Depression by successfully acting as American manufacturer for a new line of perfume and cosmetics designed by the French couturier Elsa Schiaparelli which was marketed as well by Stanco Distributors, Inc. It even commissioned an ad for its products from Dr. Suess in 1940. Since the end of World War II, ownership of the company has changed hands a number of times and today the products are distributed by Fiske Industries, Inc.