On Beyond Holcombe: Eimer & Amend 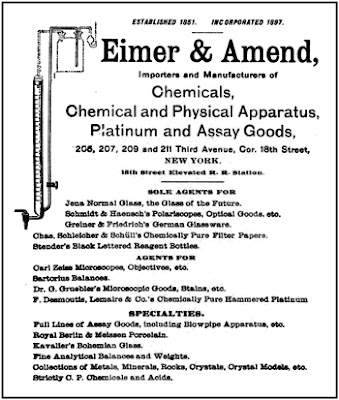 Editor's Note: Malcolm Goldstein is a contributing blogger for 1898 Revenues. this post is part of a continuing column on the companies that used proprietary battleships. 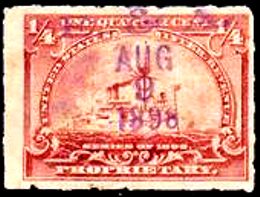 
The partnership of Eimer and Amend grew out of the friendship between two Germans from Darmstadt, Germany who emigrated to the United States. Bernhard Amend was born in 1821 and studied chemistry. While serving as an assistant to the famous German professor, Baron Leibig, Amend met the American chemist Eben Norton Horsford who suggested that Amend work for him in the United States. Leibig and Horsford, leading personalities in 19th Century science, whose stories intersect this series from time to time, are likely to appear again in other columns, but for now, it is enough that Horsford propelled Amend to journey to the United States. Amend came in 1847, but the position with Horsford did not materialize, so he found employment as a chemist in the pharmacy of William Milner at the corner of 18th Street and 3rd Avenue in New York. When Milner retired in 1851, Amend purchased the business from him.

Carl Eimer was born in 1823, met Amend while he was at college and became a naturalized American citizen in 1860. Within a few years, he had renewed his acquaintanceship with Amend and joined his business. They quickly established themselves as the leading U. S. importer of European chemical and drugs. In 1873, Eimer’s nephew August joined the business and soon cemented his position in the firm by marrying Amend’s daughter, Mary. The enterprise kept expanding, and in 1874, Eimer and Amend also began to import laboratory equipment as well as adding their own glassblowing works. Carl Eimer retired in 1882 and died in 1888. Amend built a building for the burgeoning business in 1886 at the same location in New York City where the pharmacy had stood and in 1897 the partnership incorporated. Among Eimer & Amend’s notable customers were Thomas Edison, Henry Ford and E. R. Squibb. Amend, who retired in favor of his sons about 1900, lived on until 1911. He served as a Vice-President of the German Exchange Bank, was among the founders of the American Chemical Society, and was also a member of various social and charitable organizations including the American Museum of Natural History.

In the second generation, August Eimer emerged as a notable chemist and inventor. He remained with the company and eventually became its president from 1915 to 1926. August also was involved with the organization of the Willson Aluminum Works, which developed a ferro-chrome compound that was utilized in producing new, lighter and stronger armor plating for Teddy Roosevelt’s Great White Fleet. August Eimer also held the patent for a “Bandit Proof Bag.” When jarred, this bag released a chemical spray that blanketed the attacker and turned to smoke upon contact with air, making the bandit conspicuously easy to follow since he was, literally, smoking.

By 1917, Eimer & Amend had branch offices in Pittsburgh and Ottawa. It continued in business as a separate entity until it was purchased in 1940 by the Fisher Scientific Company. Fisher, whose products were used in the Manhattan Project, in turn, became a division of Allied Corporation between 1981 and 1991 before re-emerging as a separate company in 1998. Today Fisher Scientific operates independently, and mentions Eimer & Amend on its website as its “predecessor.” 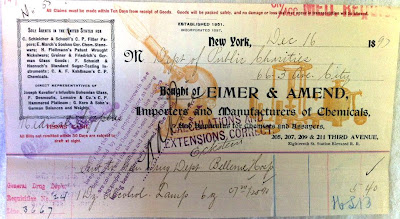