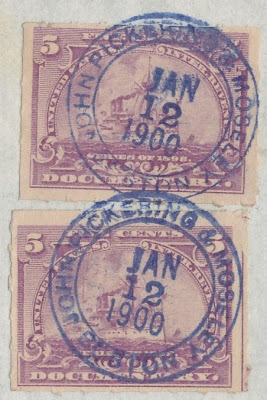 From Boston:  Its Commerce, Finance and Literature, 1892, The A. F. Parson Publishing Company:

JOHN PICKERING & MOSELEY, Bankers and Brokers, No. 40 State Street.— One of the oldest and most reliable of the Boston houses engaged in the banking and stock brokerage business, is that of John Pickering & Moseley, whose well-equipped offices are at No. 40 State Street. This time-honored concern was originally founded in 1849 by Mr. John Pickering, of Salem, and conducted by him alone up to 1869, when Mr. C. W. Moseley was admitted to partnership, the present firm title being adopted. In 1882 Mr. Pickering's death occurred, and in him the city of Salem lost a public-spirited citizen, and the Boston Stock Exchange one of its oldest and most respected members. Mr. Moseley has since remained sole proprietor, but has retained the original firm name. He was elected a member of the New York Stock Exchange in 1880, and has been an active member of the Boston Stock Exchange since March, 1888, and is popularly known by his colleagues of those institutions. He employs four experienced assistants, and is a general broker in stocks and bonds, buying and selling on commission, and making advances on securities. His ample means enable him to meet the requirements of his patrons upon the most satisfactory basis. The New York correspondents are Messrs. A. M. Kidder & Co., and Dominick & Dickerman. All market news is received by private wires, and transactions are conducted in a manner conducing to the best interests of patrons. Mr. Moseley resides at his birthplace, Newburyport, Mass., during the summer mouths, and he enjoys a patronage extending to all parts of New England. Both in financial, commercial and social circles he bears an unsullied reputation, and commands the confidence of all with whom he has come in contact.
Posted by John Langlois at 6:00 AM