Bob Hohertz's impressive 5-frame exhibit of the revenue stamp paper of the Spanish American War Era won a show gold award and an American Revenue Association gold award.  Judged to be the best of the ten revenue exhibits on display it also was awarded the ARA's Grand Award.  It also garnered one of the prestigious American Philatelic Society Medal of Excellence awards as the best exhibit of pre-1900 material in the entire show. Congratulations Bob!

Below is a shot of Bob standing in front of the first three frames of his exhibit. 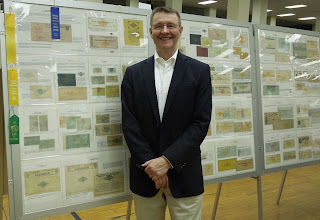 The highlight of the show for me personally was the opportunity to rendevous with Bob Patetta who has been of great assistance in providing scans of material to augment my on-document blogs about the usage of the adhesive stamps of the 1898 tax period.  Bob and I first met at a Garfield Perry show some 25 years ago and hadn't seen each other since then.  We had renewed contact in recent years via the Internet -- specifically through eBay and the 1898 Revenues blog.  I'm writing this wrap-up on Monday morning because Bob and I spent hours last night reviewing the 1898 material we each had brought to the show for a show and tell session.

I'll be featuring much more of Bob Patetta's material in upcoming blogs!﻿