Several posts ago I wrote briefly about the book American Railway Transportation, by Emory R. Johnson.  The book was published in 1903 and provides a nice summary of many logistical and economic aspects of the railroad business at the turn-of-the-century and the 1898 tax period.  Today I include an essential paragraph for the collector of express cancels and documents and a collector of the 1 cent documentary battleship.

There are no available statistics of the volume of express business done annually, because, unlike the railroad corporations, the express companies are not required to make yearly reports to the United States Government.  The only figures are those compiled by the the United States decennial censuses, and the statistics to be gathered in connection with the census of 1900 have yet to be published.  According to the census of 1890, the toal mileage of railways, waterways and highways covered by the service of express companies was 174,534 miles, of which 92.6% was under the control of the six large companies--the American, Adams, United States, Pacific, Southern, and Wells Fargo & Co.  during the year ending June 30, 1890, there were transmitted 98,118,430 packages, weighing 1,646,273 tons.  The waybills of money shipments numbered 17,258,682, and the sales of express money orders numbers 4,598,567.

This leaves me with some homework to find the 1900 census and track the changes in these figures, especially since they help account for a fair portion of the 1 cent documentary battleships ever used.  Also until this paragraph, I never realized the dominance and control of the following companies: 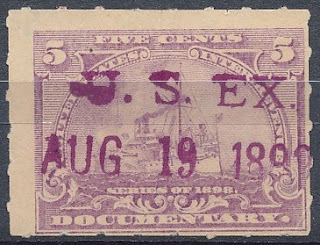 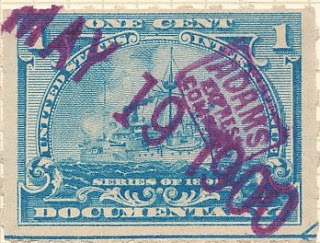 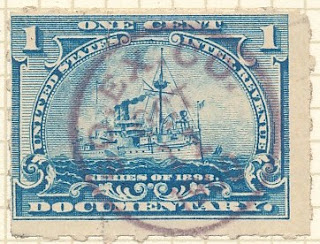 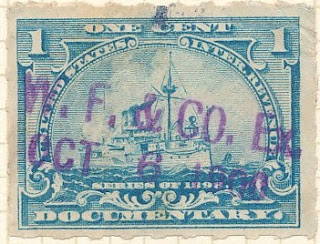 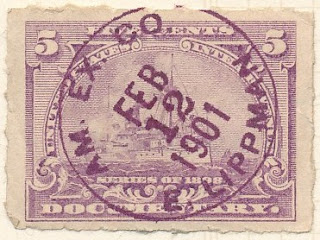 American Express
Posted by John Langlois at 7:00 AM