After another several month hiatus, I thought I’d resume blogging by giving a shoutout to the upcoming American Revenue Association Meeting at the annual Garfield-Perry March Party Stamp Show in Cleveland this weekend and, at the same time, feature some 1898 document usages from Cleveland, Ohio.

The show runs from Friday March 23 through Sunday March 25 at the Masonic Auditorium in Cleveland. It is open to the public at no charge and features 180 frames of exhibits, more than 50 dealer booths, and postal stations for both the USPS and UN. The March Party show is a major World Series of Philately qualified philatelic exhibition and any collectors or readers of this blog residing in the Cleveland environs would surely benefit from attending. For more detailed information go here.

I don’t often blog about 1898 revenue imprint material that being Bob Hohertz’s prime area of expertise, but since altering my 1898 documentary revenue exhibit to focus more on the fiscal history of the 1898-1902 tax period rather than usages of specific stamps, I’ve included some interesting revenue imprint material to the exhibit. So I’ll depart from my normal blogs about adhesive revenues and write occasionally about some imprint usages. 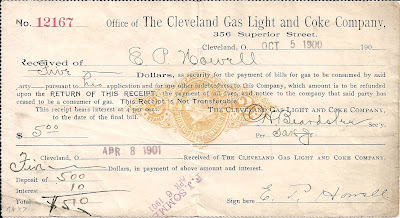 Interest Bearing Security Deposit Receipt
The Cleveland Gas Light and Coke Company
October 5, 1900
The Cleveland Gas Light and Coke Company required a $5 deposit from each customer as a security for the payment of bills or other indebtedness which amount was to be refunded when a customer ceased requiring service. To obtain the refund , one needed to return the receipt issued when the initial deposit was paid. Simple payment receipts were not subject to taxation under the 1898 War Revenue Act, but this is not just a receipt.

As noted on the receipt the security deposit bore interest at the rate of 4% so in effect this gas company receipt was treated as a certificate of deposit and was taxed as such, hence the 2-cent revenue imprint printed in the center. In this instance service lasted just 6 months and the customer earned and received 10-cents in interest. I wonder who actually paid the 2-cents tax, the customer or the gas company?