William Sheldon Lawson and his firm had offices in New York and Boston. 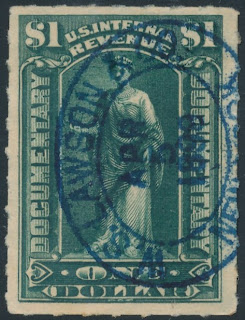 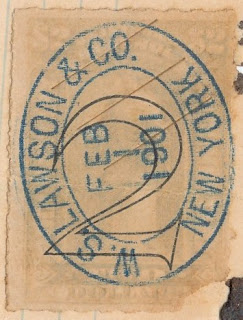 W. S. Lawson memorandum of sale for 100 shares of the Mobile & Ohio Railroad
From "Illustrated Boston, The Metropolis of New England", 1898:
W. S. LAWSON& CO., Bankers and Brokers, No. 14 Exchange Place.— The influential position held by Boston in the financial world is chiefly due to the enterprise and ability of her leading bankers and brokers, who have procured the capital and freely used the same for tlie development of the great railway, mining and manufacturing interests of the country.  In this connection it is a pleasure to make prominent mention in this commercial review of the city, of the widely known and reliable firm of Messrs. W. S. Lawson & Co., bankers and brokers. No. 14 Exchange Place. The firm's headquarters are in New York, at No. 49 Exchange Place.  The New York office was established in 1876, and the Boston office in 1881. The individual membersof this firm are Messrs. William Shelden Lawson, member of the New York and Philadelphia Stock Exchanges, Harry A. Day, member of the New York Stock Exchange, Fisher Howe, Jr.,  member of the Boston Stock Exchange, and Bennet H. Preston.  The firm occupy in Boston well equipped offices, with private wires to New York, Philadelphia and Chicago, and their facilities for transacting business are of a very complete character. Messrs. W. S. Lawson & Co., purchase and sell for cash or on margin all stocks, bonds, government and miscellaneous securities as listed on the various Stock Exchanges, also grain, provisions, petroleum, mining stocks, cotton, etc. This firm has been noted for obtaining early and accurate information as to the state of the different markets, and numbers among its permanent customers many active operators and wealthy investors. The Chicago correspondents of the firm are Messrs. Counselman, Day, Schwartz and Dupee.
Posted by John Langlois at 6:05 AM