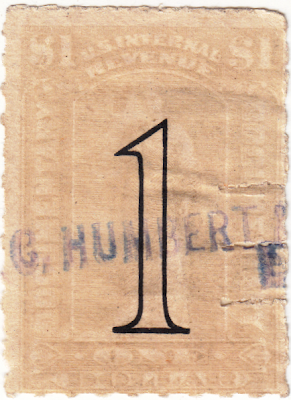 E. C. HUMBERT & CO.
Dave Thompson scan
On February 1, I posted the story of the near death of broker Thomas Thorne, and the mortal injury of his coachman in a buggy accident.  In June 1906, founder of the firm E. C. Humbert & Son perished from an accident involving his carriage and an automobile.  Even for the wealthy moving at horse-drawn speeds, transport was dangerous in early 20th century America.
Just how many automobiles were there in 1906?
From the New York Tribune, June 19, 1906, page 3:
E. C. HUMBERT DIES FROM INJURIES.
Head of Brokerage Firm Was Thrown from Carriage in Collision with Automobile.
Orange, N. J., June 18 (Special).--E. C. Humbert, father J. J. C. Humbert of Madison, and senior member of the firm E. C. Humbert & Son, brokers, of New York, died today at his son's home.  Mr. Humbert's death is the result of injuries received on June 2, when he was thrown from his carriage in a collision with an automobile driven by Frederick Clark of Tarrytown, N. Y.
Following the accident Mr. Humbert was carried in an unconscious condition to his son's home, where he has since been cared for.  Because of his advanced age and the severity of the shock he sustained, the surgeons held out little hope for his recovery from the start. Clark is under $500 bond to appear at the next term of court.
Posted by John Langlois at 6:00 AM