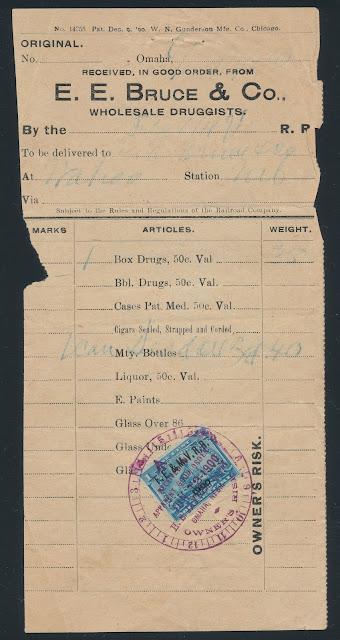 Waybill for freight from the firm E. E. Bruce & Company transported on the Freemont, Elkhorn & Missori Valley Railroad.  The waybill includes a one cent documentary tax stamp with a printed cancel from the FE&MVRR.
The E. E. Bruce Company made its founder, Edward Bruce, a very wealthy man.  His prosperity as a businessman in Omaha, Nebraska, gave him a position of leadership in the community.  One of the most famous events commemorated in American philately, that honoring the Trans-Mississippi exhibition held in Omaha from June to November 1898, was in part managed by Mr. Bruce.  Bruce was the exhibits manager for the 4,062 exhibits, for a fair that covered 108 city blocks.

Country Club Bourbon
sold by E. E. Bruce of Omaha, Nebraska
While by title a druggist, Mr. Bruce made most of his fortune through the distribution and sale of alcohol.  E. E. Bruce sold wine, whiskey, and brandy, among other spirits, and had a substantial sale network that spread west all the way to the Pacific.  Bruce sourced his whiskey in likely places like Kentucky, then packaged and shipped it west.
Read more about Edward Estelle Bruce at the "Those Pro-Whiskey Men" blog. 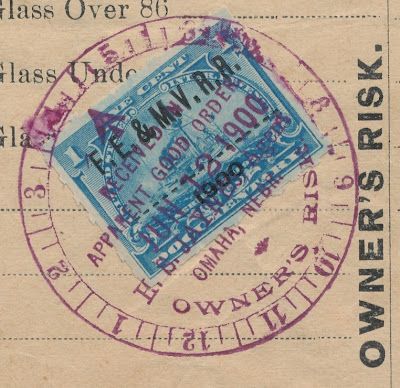