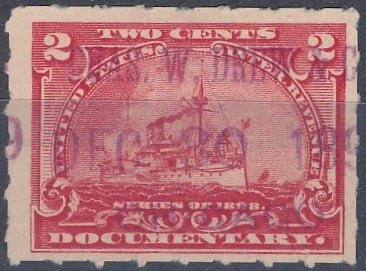 Charles W. Drew & Company was in the fire insurance business in Chicago. From the December, 1895 publication "Portraits and Biographies of the Fire Underwriters of the City of Chicago:"

"Charels Wilson Drew was born in Meridian, Cayuga County, New York, on the 19th of April, 1835. He lived on a farm until he was fifteen years of age, receiving his education in the Common Schools and Academy. He commenced his business career as clerk in the book store of John Ivison, at Auburn, New York. In 1854, he went overland to California, returning home, via the Isthmus in 1859. After two years in business, he joined the army in 1861, where he remained until the close of the war, when he removed to Chicago and entered the insurance business. Mr. Drew married Miss Anna S. Fleetwood in 1867; they have one daughter. He is a member of the Calumet, Washington Park, and Union League Clubs.

The power of the Google search engine, and recent work to digitize old, out of copyright books and newspapers has revolutionized the work of revenue stamp cancel collectors.  It has become a simple and at home activity to determine the corporate or individual background of many cancels that can found on the documentary 1898s.  The Charles Drew cancel above required no more than the use of the term Charles W. Drew & Co. in quotes in a Google search.

While extensive work has been done by the philatelists Mustacich and Giacomelli in their book the Battleship Desk Reference (BDR), the BDR is a tool for determining the name of a firm from its initials on the proprietary series of stamps.  Even from that point using the BDR, once the corporate name has been determined, an entire world can be opened up by entering the name of the proprietary article firm in a Google search.

From my experience the world of the internet and Google is even more remarkable than the power of search engines and the data behind them.  I am currently sitting on a couch on a porch of a villa by the Indian Ocean.  I am in Diani, a beach area south of the Kenyan port of Mombassa.  The sun is shining, there is a (now quiet) bar next door called the Forty Thieves, and I am sipping coffee while I wait for my wife and kids to wake up for another day on the beautiful beach.  All the while I am able to take a few minutes a day to blog 1898s with the power of an enormous data base and a search capability courtesy of my laptop, and a broadband internet connection courtesy of Safaricom corporation, a Kenyan cellphone company.

The sleepy backwater of 1898 revenues, the hobby of a few, comes alive with this set of tools that include the hardware connection to the web, the immense amount of scanned and saved data on the web, and the power of a sophisticated search engine.  All this and I am physically very far from any of the assests needed to conduct traditional philately and research.  I don't even have my stamps with me, only scanned images.  The potential world of philately is changing.  The possibilities are enormous; most are left unexploited.  This blog is a small attempt by an amateur philatelist to explore the space.