Cancel for December 24: A. Breslauer & Company 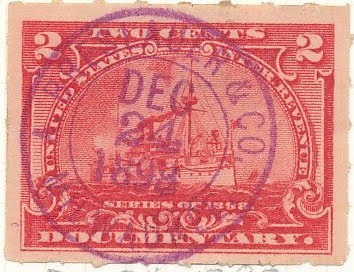 A. BRESLAUER & CO.
DEC
24
1899
MILWAUKEE.
A. Breslauer was a distiller and spirits company in Milwaukee, Wisconsin that operated from 1883 to 1918.  I wonder whether the prohibition movement put it out of business, though prohibition wouldn't hit at the national level for another 2 years after Breslauer shut down.  The German Lutherans of Wisconsin were generally a "pro-wet"/non-prohibition force.
A. Breslauer produced and distributed a full line of beverages that included the following brand names:  "Cheddington", "Connet", "Florida Bitters", "Graham Rye", "Henry Van Eerden Gin", "Kilbourn", "La Belle", "Old Chesly", "Old Hickory", "Palm", "Standard Club", "Topcliffe Gin", and "Waldorf Club."
Posted by John Langlois at 1:00 AM