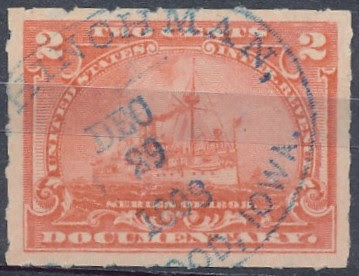 
Sometimes the luck of finding another stamp with a similar cancel is the key to solving the identity of the cancel.  Here is one of those cases.  The cancel above could be fully deciphered with the help of the partial cancel below.  J. V. Hinchman was a leading citizen of Glenwood Iowa and ran a drugstore before becoming a banker.  But only knowing the town name of Glenwood led me to discover the origin of this cancel.  I found these cancels in two completely different lots of stamps, with the stamp above the first stamp in my possession.  The stamp below led me to the town of Glenwood and Mr. Hinchman's business address.   A short biography of Mr. Hinchman is below. 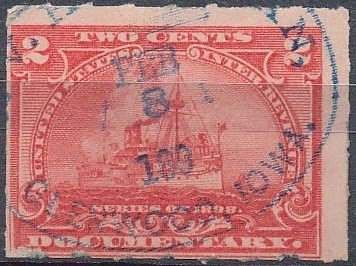 From the Progressive Men of Iowa:

County, Ind. He comes of English ancestry on his father's side and English and Irish on his mother's side. The father was James Hinchman, born in Monroe county, Va., in 1800, and settled in Rush County, Ind., in 1822, where he lived until his death, in August, 1882. He was a farmer, who was successful in life, and with his wife brought up thirteen children–ten boys and three girls. His wife was Nancy Nickel, born in 1804 and died March 18, 1897, aged 92 years and 6 months. She had lived and kept house on the same farm seventy-four years. At a family reunion, held at the old family homestead, September 4, 1880, the parents and children were all present, the children all being heads of families; sixty-seven children and grandchildren were present, and neighbors and friends to the number of 400.

Joseph V. Hinchman lived on the farm until he was 21 years old, and received a common school education. He had no professional or business training until he went into business for himself. Teaching school at $20 a month, and boarding himself, was his first employment after leaving the farm. He came to Glenwood October 13, 1854, and opened the first drug store in the county, a business which he carried on for twenty-five years, and sold out in 1879. This was his first business venture, and it was started at a time when $1.50 to $2 a day was a very satisfactory profit for the store. In 1869 he started a private bank in connection with the store, but sold it out in 1871, and helped organize the Mills County National bank, of which he was that year elected president, an office which he held for ten years. In 1882 he sold his interest in the National bank and established the Bank of J. V. Hinchman in Glenwood, of which he is still the proprietor. Here is a case where success has been achieved by steady, hard work and economy, and without any element of speculation. He started with a capital of $1,500, a portion of which was used in entering land in Polk and Mills counties, the remainder employed in his drug store. This has grown until now Mr. Hinchman is rated at $300,000 above all debts. He never mortgaged a piece of property in his life. While accumulating this fortune he has been generous and has, within the past six years, given away to various churches and colleges $30,000; $25000 to Des Moines college–the Baptist institution. Mr. Hinchman's has been a purely business life. He has devoted himself with remarkable singleness of purpose to achieving success in a financial way, and by honest
dealing, promptness in meeting obligations, economy and industry, and attention to details, small as well as large, he has achieved great success. Like many other strong, successful men, he has no partners and no low-priced clerks or employes. He was a member of the whig party, and has always been a republican. As his generous gift indicates, he belongs to the Baptist church, and has for thirty-three years. Mr. Hinchman was married to Nancy L. Fish in Moundsville, Va., September 27, 1859. They have had only one child, who died in infancy. Mrs. Hinchman was born November 13, 1833, and is still living.