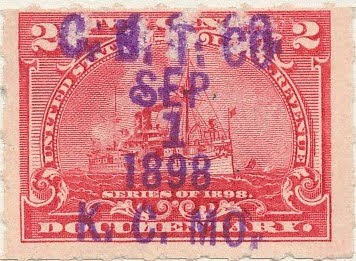 C.B.T. Co. was the refrigerator car company controlled by Schwarzchild and Sulzberger, the 6th largest meating packing plant in the US at the turn of the century. CBT, like other meat packer associated refrigerator car lines, hauled primarily dressed (butchered) beef out of Chicago and the midwest to distribution warehouses in eastern urban areas. By the time of the cancel of this stamp, shipping live cattle east was in sharp decline and all the growing meat packers were shipping dressed beef by rail. G.F. Swift was the pioneer in the dressed beef business, but other companies quickly imitated the model including Armour, National Packing, Morris/Fairbank, and Cudahy. This stamp was cancelled in Kansas City, a major plant site for S&S.

I can't find a photo of an original Schwarzchild and Sulzberger refrigerator car, but I have found a photo of a model railroad car. Note the C.B.T. CO. on the lower right side of the car.
***
S&S along with the other major meat packers listed above were part of the industry exposed by Upton Sinclair in his book The Jungle for dangerous labor and unsanitary food handling practices. Outcry from the book helped lead to regulation of the industry, though mostly for food safety and purity rather than worker safety and care.
Posted by John Langlois at 1:00 AM