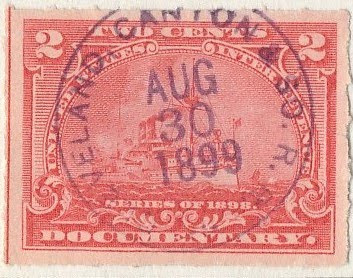 CLEVELAND, CANTON & SO. R. R.
AUG
30
1899
***
The Cleveland, Canton, and Southern Railroad was orgininally called the Youngstown and Connotton Valley Railway. The Y&CVR was established in 1877 and built a line from Bowerston to Youngstown. The Y&CVR purchased the Ohio and Toledo RR in 1878 to expand its operations and they continued to expand through 1885 when they went bankrupt. The railroad was then reorganized as the Cleveland and Canton Railway and eventually changed its name to Cleveland, Canton and Southern RR as they expanded into southern Ohio. The CC&SRR joined the Wheeling and Lake Erie Railway in 1899, not long after this stamp was cancelled.
Posted by John Langlois at 1:00 AM