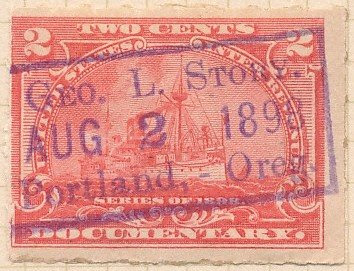 "George L. Story, a pioneer in the drug business of our city, and at present an efficient member of the Fire Commission, was born in Manchester, Mass., in 1833, and received his education at a private school in Salem. In 1847 he entered a wholesale drug store, and thoroughly mastered the subject of pharmacy. In 1850 he came out to California, and in '51 came up on the coast to Oregon. With a partner, Devaux Babcock, he bought out the drug story of Hooper, Snell & Co. and carried on the drugstore business here. He afterwards bought out Babcock and formed a partnership with Story, Redington & Co., of San Francisco. He closed out his interest here, however, to Smith, Davis & Co., and entered into a large wholesale business in San Franciscon, but returned to Portland in 1862, and has remained her to the present time. In 1872 he was appointed to fill a vacancy in the Common Council, and was thereafter elected to the same position and served three years. He has also served the State Legislature from Multnomah County. At present he conducts a large fire insurance business, and is a man held in high esteem by all our people. From no one better than from him may we gain an understanding of the old times in Portland, when the old pioneers were young men together, ambitious and eager to succeed, but all equals, and never so much engrossed in their own concers as to allow one overtaken by bad luck to go by the board."
Posted by John Langlois at 12:01 AM