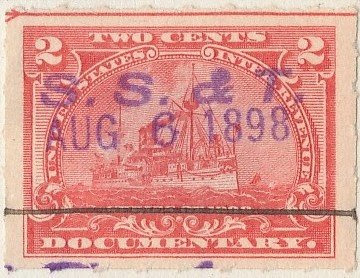 A major Ohio-based oil company, and at the time of this cancel a large competitor of the Standard Oil Company in Ohio and the region by virtue of its Cleveland refinery, Scofield, Shurmer & Teagle fought for years with Rockefeller and Standard to compete and maintain their independence. In 1901 they finally sold out to Rockefeller. Despite the fight for independence, once SS&T gave in, one of SS&T's founder's sons became the best known and successful oilmen in the world after Rockefeller himself.
------
Walter Clark Teagle (May 1878 – January 9, 1962), was responsible for leading Standard Oil to the forefront of the oil industry and significantly expanding the company's presence in the petrochemicals.
In 1901, Standard Oil bought out the Teagle family refinery, and placed Walter Teagle, the son of an SS&T founder, in charge. By 1910 he became a director of Standard Oil, and a vice president shortly thereafter. At the age of 39, Teagle became the youngest president of Standard Oil of New Jersey, then known as Esso, for S. O. of NJ, and since 1972, known as Exxon. He served as president (1917-1937) and chairman (1937-1942) of the company. Under his leadership, Standard Oil became the world's largest oil producer, increasing market share from 2% to 11.5%.
Posted by John Langlois at 6:13 AM