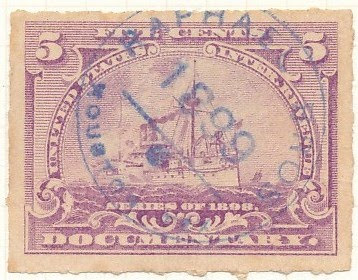 Raphael Brothers was an insurance agency and was owned and operated by brothers Emanual and Mose Raphael in Houston. Emanual was a business and civic leader in Houston and a member of the Board of Trustees of the Rice Institute which would one day become Rice University. Apparently, Raphael helped guide Rice to achieve his vision to create an institute and polytechnic school.
***
The insurance agency was successful at the time of this cancel in 1899. But in 1900, one of the deadliest natural disasters in US history destroyed Galveston Island, the largest city in Texas at the time. The hurricane of 1900 is one of the most infamous to ever hit North America, with a death toll estimated at a minimum of 6000. I haven't been able to determine the efffects of the hurricane on the Raphael's business but it could not have been positive.
***
BTW, William Marsh Rice, the founder of Rice University, was murdered for his money by a New York lawyer in 1900.
Posted by John Langlois at 1:00 AM