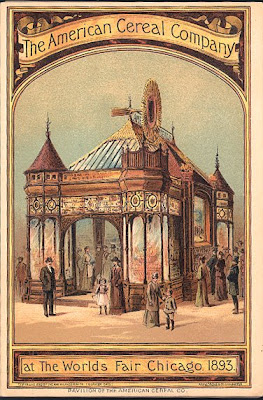 The American Cereal Company was founded in 1891 when seven oat millers merged together. Those millers included two Iowa firms, one in Illinois, and four in Ohio. One of the Ohio millers was called the Quaker Mill Company.

Company headquarters were in Chicago, which probably has much to do with company sponsorship and participation in the 1893 Chicago World's Fair.

In 1901, the Quaker Oats Company was founded as a holding company and acquired the majority of American Cereal Company stock. In 1906 Quaker Oats took over all of the assets of the American Cereal Company and became a full operating corporation. Today Quaker Oats owns one of the best known consumer brands in the United States, and in some cases, the world.
This blogger has lived in the West African nation of Liberia for nearly 10 years. In that country, any kind of oatmeal is known as "Quaker Oats"! 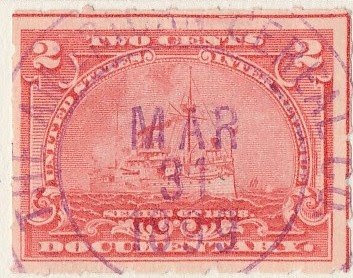 2 Cent Documentary roulette with guidelines at top and right. Cancelled by The American Cereal Company on March 31, 1899.
Posted by John Langlois at 9:53 PM