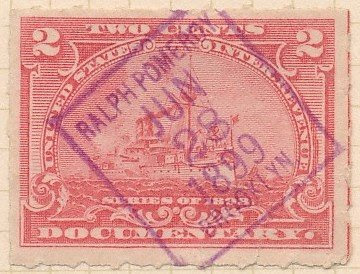 I've found one possibility for a Ralph Pomeroy in Brooklyn, but I can't understand why he would have used and handstamped a 2 cent documentary revenue. Maybe his work required repeated use of such stamps. It is possible to trace a Ralph Pomeroy to Brooklyn at the turn of the last century. He was a gynecologist, and oddly, invented tubal ligation without publishing or taking credit for developing the procedure. Two other doctors presented his work at a medical conference after Pomeroy's death.
Posted by John Langlois at 1:00 AM