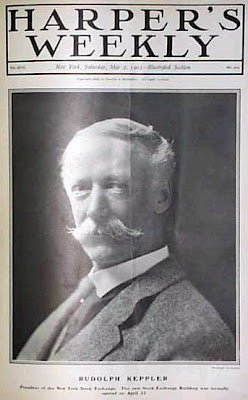 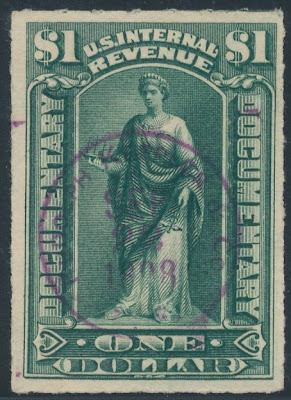 
BROKERS ON NEW FLOOR
Struggle to Make First Transaction on Stock Exchange.
Opening Day in the Marble Building Not Strong for Securities--Medals for Committeemen and Gavel for President Keppler.

The members of the New York Stock Exchange settled down to business yesterday in their new quarters.  The flowers and decorations of the day before had all been removed, and the big board room wore a strictly businesslike aspect, except for a big twenty-four-foot wreath of flowers sent by the Produce Exchange.  President Rudolph himself presided at the opening of the day's business, and there was a large attendance of brokers on the floor.

When the gavel fell many brokers vied with each other for the honor of making the first transaction.  Of course, where business is begun all over the room at one and the same time, it is a difficult matter to determine such a 'first transaction,"  but the ticker reported it as 100 shares of Mexican Central at 27.   The sale was made by Charles Gregory to Zimmermann & Forshay.  The next recorded transaction was in Chicago Great Western, while succeeding transaction, in their order, were Colorado Southern, Pennsylvania, Rock Island, and St. Louis and San Francisco...

After the close of business the Governors of the Exchange held their first meeting in the new building.  Besides the routine matters, the meeting transacted some special business.  This was the presentation of certain marks of appreciation to the members of the Building Committee.  This committee consisted of Ransom H. Thomas, Chairman, Rudolph Keppler, J. T. Aterbury, R. P. Doremus, H. G. S. Noble, and Ernest Groesbeck.

To each one of these members was presented a gold medal five inches in diameter, of pure gold, value of over $500, and a set of resolutions.  The gold medals were framed in a case of leather, which was so arranged that when opened it showed both sides of the medal.  They were designed and made by Tiffany & Co.  On one side was an embossed picture showing every detail of the Broad Street facade of the new Stock Exchange, and on the other was the following inscription: "The New York Stock Exchange to ____ (here the name of the committeeman was inserted) in grateful recognition of services rendered during the construction of the Stock Exchange Building.  MDCCCCIII." ... 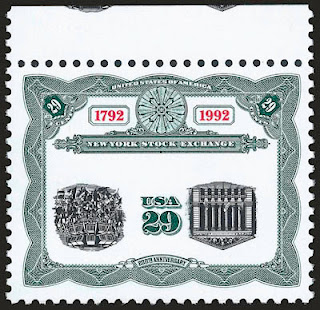 Scott 2630c, NYSE commemorative invert from 1992 sold in 2010 Siegel rarities of the world sale.  The stamp features an inverted facade of the Broad Street front of the Exchange.