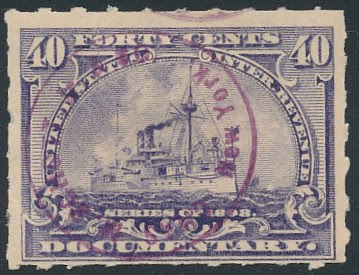 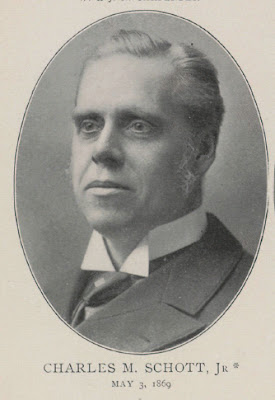 Charles M. Schott Jr. joined the NYSE in 1869 and was one of its most senior members by the 1898 tax-period.  Note the clean shaven face, uncommon in the late 1890s when waxed moustaches and beards were in vogue.

A FAILURE IN WALL-STREET.

Schott & Knight, brokers, at No. 6 Wall Street, who also have an office Philadelphia, sent a notice to the Stock Exchange yesterday, in which they said:  "Owing to complications growing out of our transactions between New York and Philadelphia, we find it necessary to announce our suspension."  The firm is composed of Charles M. Schott Jr., who has been a member of the Stock Exchange for 15 years, and Thomas C. Knight, of Philadelphia.  He was in New York yesterday and said the house traded on the market between the two cities.  Some customers failed to put up margins and embarrassed the firm.  All contract were, however, carried out.  Everything was all right in Philadelphia, and not a dollar was owed there.  The trouble was here, but the obligations were not large, and the house expected to resume in a short time.  The complications spoke of were in the accounts between the two cities, and it was thought best to suspend until the firm could find out how it stood.  In the Street it was said the New York house was long of the market and Philadelphia house was short.  The liabilities were supposed to be only about $25,000...
Posted by John Langlois at 6:00 AM