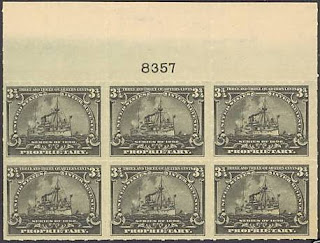 I don't own this either.  Steve Wittig does, and he is currently selling it on Ebay for $3,295.  See here:  Wittig Ebay RB29 Plate Block.  I wonder where the demand is for this type of materiel selling for this much these days.

There is quite a mismatch between the block from yesterday's post fetching only a fraction of its catalog value at auction and the price of this plate block.  I think I recall a Michael Aldrich catalog from probably 2 years ago in which this block was posted for sale, and it was even labeled as "ex-Wittig."  If this is the same block (I recall the centering being the same and there are just too few of these) then it doesn't appear if the block was ever ex-Wittig.  Whatever the case, much patience will be required to get the price being asked for this item.  Somewhere out there is a collector that might want it at the price.  Maybe not. Especially if it has been for sale for more than 2 years!

Post script April 2010:  It is likely that the block above was probably consigned to Mr. Aldrich for a period.   It likely never sold during the contracted period and was returned to Mr. Wittig.  So at least in terms of possession there was an "ex" period for this block.
Posted by John Langlois at 12:03 AM