2 Cent Battleship Documentary: 1940 Letter from the Director of the BEP 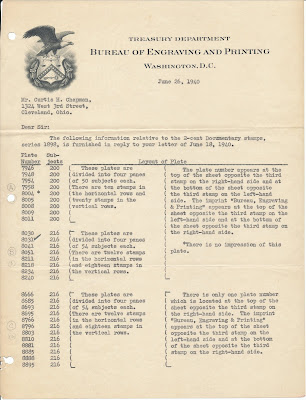 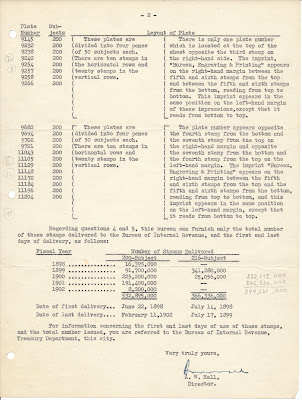 Click on the images to download for better viewing.  They will download as a .jpg.
***
1940 Letter from A.W. Hall, Director of Bureau of Engraving and Printing to Curtis Chapman in Cleveland, Ohio.
***
I acquired this letter in the Tolman sale (lot 2496). It was included in the 2 cent battleship calender lot. Its inclusion in the lot leads me to think that the calender, inclusive for all business dates for the three year period of the tax imposed on most documentary transactions, was compiled by Mr. Chapman. The random notes in Mr. Tolman's hand in the margins of the calender indicate a familiarity with the cancels that would not be of the depth of that needed to compile the collection in the first place.
***
The "Tolman sale" was a multi-phase auction held by Robert Siegel in New York of one of the more significant US Revenue stamp collections ever put together. Part 4 of the sale was held in May 2009, and this letter was included in that portion of the sale.
***
The Christopher West/Elliot Perry work from Mekeel's and the Castenholz re-publication lists the total quantity issued of 2 cent documentaries for the 1898 series as 942,066,800. This includes the I.R. overprinted 2 cent postage stamps. If we use the total issued of the 2 cent battleship stamp of 899, 231,00 as stated in this letter then there were 42,835,800 of the 2 cent Washington postage stamps overprinted. Further, Mr. Hall in the letter above tells us that there were 16,395,000 2 cent battleship documentaries delivered in 1898. As all the Washington overprinted stamps were delivered in 1898, we can then figure that a total of 59,230,800 2 cent documentaries were delivered in 1898.
***
Plate numbers as reported by Mr. Hall in his letter and those by Robert Mustacich on his website differ somewhat. Hall's letter states that 216 subject plates with the numbers 8881, 8885, 8888, and 8895 were used. These are not reported by Mustacich. Hall also reported the existence of plate 8004 that was never used. If anyone has a copy of any of the above listed numbers I would like to see them. I assume the philatelists of the early 21st century to be right, not Mr. Hall.
Posted by John Langlois at 1:00 AM