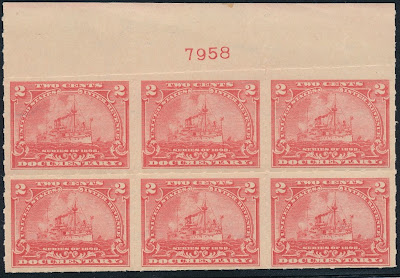 Top plate block of 6, #7958. Horizontal rouletting is torqued across the block, growing more off-center to the right, especially for the rouletting in the top margin. This block comes from one of the earliest plates created by the Bureau of Engraving and Printing to print this stamp, a 200 subject plate divided into 4 panes of 50 stamps each.
***
At Robert Mustacich's Battleship Revenues website (http://www.battleship-revenues.com/) you can find a list of the plate numbers used for the 2 cent battleship documentary as well as all the other battleship stamps. He uses tables compiled by Tony Giacomeli and the Durland Standard Plate Number Catalog for his reference. For the 2 cent documentary, he lists a total of 44 plates used by the BEP to print the stamp, including both 200 and 216 subject plates.
Most plates were used to print stamps that received either rouletting or hyphen-holes only; a smaller group of plates were used to print both, essentially those plates in use by the Bureau during the switchover from rouletting to hyphen holes at the end of 1899.
***
Quantities issued: Almost a billion copies of the 2 cent documentary battleship were printed, which explains the use of so many plate numbers. After multiple print cycles the plates began to wear and new plates had to be prepared to keep the images of the stamps sharp. In a 1940 letter I have from A.W. Hall, the Director of the Bureau of Engraving and Printing, 899,231,000 2 centers were delivered to the Bureau of Internal Revenue through February 11, 1902. I will post this letter on the blog this month.
Posted by John Langlois at 1:00 AM