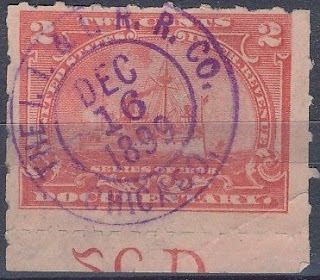 The 2 cent documentary battleship stamp above had a peculiar sort of margin marking added by the Bureau of Engraving and Printing to enable the printers to distinguish the value and type of the stamp on the plate.  Between the proprietary and documentary series there were more than 20 types of stamps, all with the same design. And without any color differences to set them apart the plates looked all much the same.  Added in the margin of at least some of the battleship plates was an identifier; in the case of the 2 cent documentary above, 2C D.  The mark was added to the plate so that it could be read forward, instead of in reverse.  The result is a reverse 2C D in the final printed copy.

This same technique was used on other battleship stamps, including the fractional proprietary values.
Posted by John Langlois at 1:00 AM