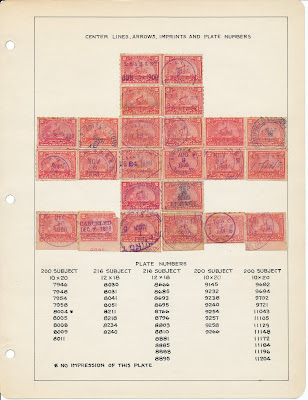 Click on the image to download the page for better viewing.
***
Plate markings/positions of the 2 cent battleship documentary. Stamps a bit foxed and a plate margin single has lost its selvage, but study neatly displays most of the collectable positions of this stamp (margin and corner positions are missing, as is the 2cD identifying margin imprint). Rouletted and hyphen-holed stamps are mixed in this study. Page acquired in the Tolman sale.

***
In future posts I will break down the individual positions and highlight other examples of similar plate markings. Margin arrows, center lines, and margin markings make for many collectable positions on the battleship stamps. This is true for most stamps printed by the BEP during this time period.

***
I think this study was compiled by Curtis Chapman. See the letter from the BEP posted in the blog entry for September 7, which lists the plate numbers used for the 2 cent battleship doc. The plates listed in that letter to Mr. Chapman correspond with those listed above, including the specific reference to plate #8004 as having never been used. The stamps used to create this study match many of the companies and cancels in the nearly complete 2 cent 3 year calender I acquired in the same lot. This calender has notes made in Mr. Tolman's hand in the margins in which he identified some of the railroads and cancels and speculated about others. While not conclusive, the collector that compiled the calender was likely very familiar with the companies and railroads used to build the collection and more familiar than Mr. Tolman as indicated by his notes.
Posted by John Langlois at 1:00 AM