When the 1898 battleship stamps were first introduced they did not include the 40 and 80 cent values. These stamps were added to the series in October 1898, likely for use on life insurance policies.

Elliot Perry, aka Christopher West, reported in Mekeel's Weekly Stamp News nearly 90 years ago that most of the 40 and 80 cent stamps were issued prior to January 1900, roughly about the time that the Bureau of Engraving and Printing switched from rouletting to hyphen holes. This would explain the relative scarcity of hyphen hole stamps on this and the 80 cent value and the consequent higher prices for the hyphen hole versions of these stamps. In any case, Perry reported that the total quantity of 40 cent stamps issued was less than 3 million, either with rouletting or hyphen holes. This is in contrast to the issue of over a billion 1 cent stamps. 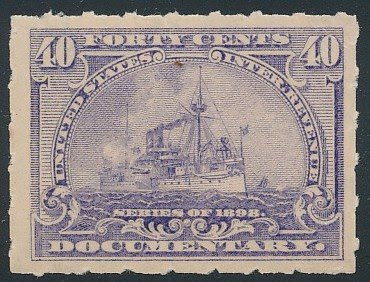 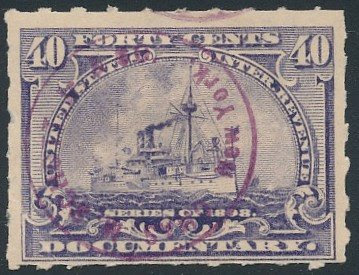