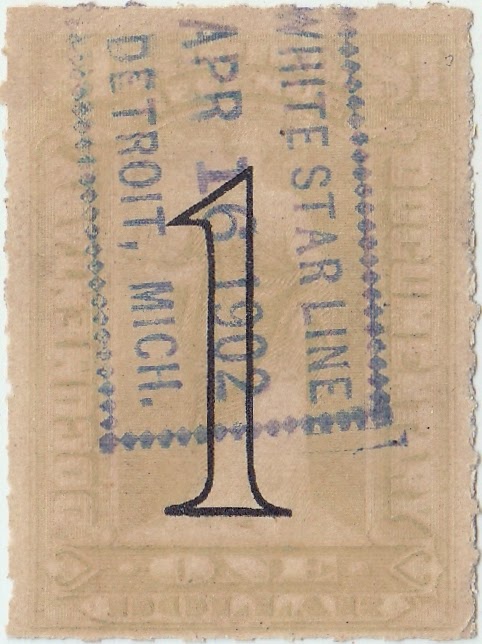 Stamp almost certainly used for passage on the Tashmoo for a ticket of $30 or less. 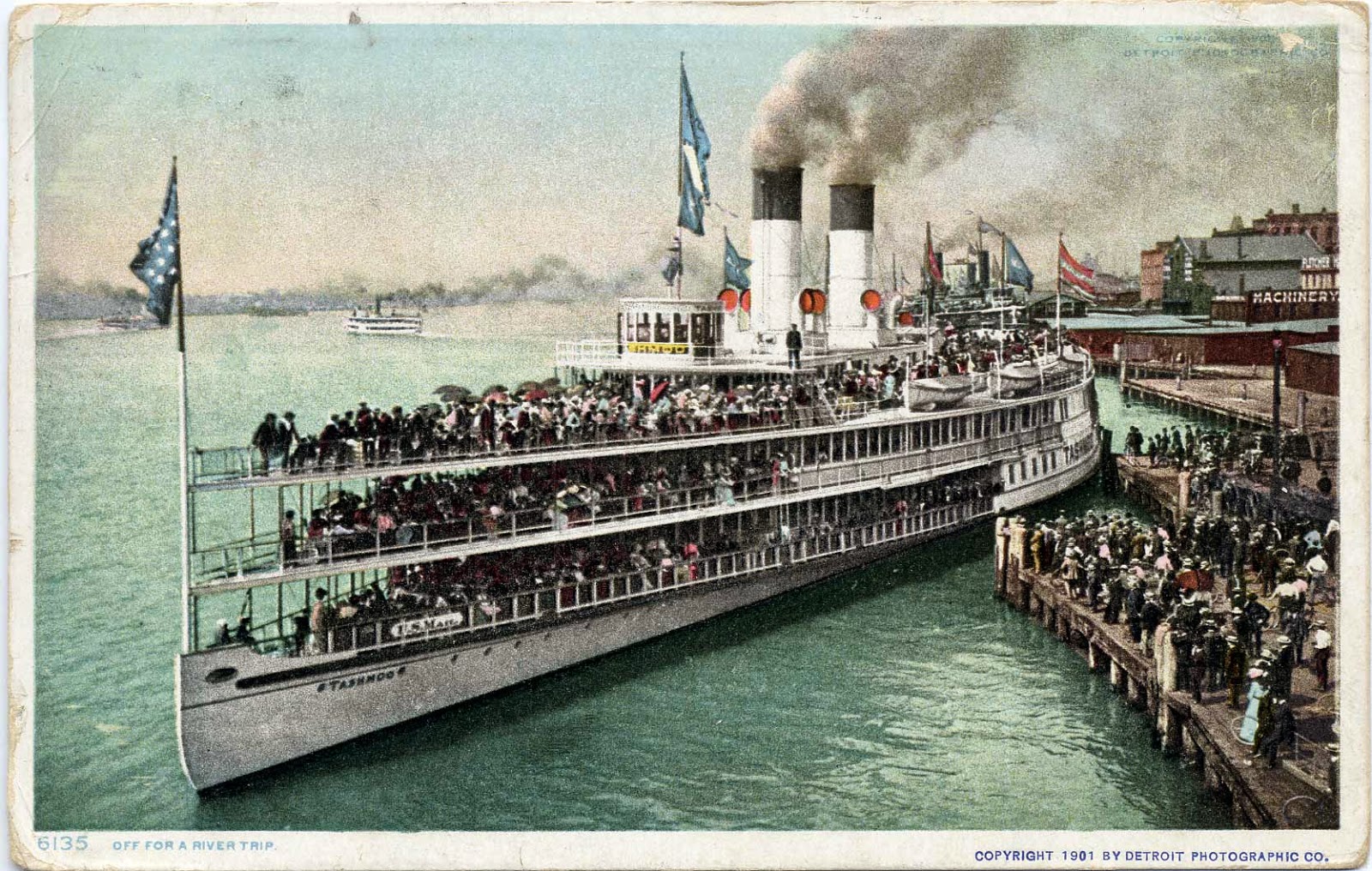 Steamer Tashmoo pulling away from the wharf

From Midwest Boat and Recreation, by Dale Blanshan. January 2014:

In 1912, the British White Star Line ruled the oceans with the great Titanic.  At the same time, another White Star Line -- this one American -- ruled the Great Lakes with the elegant Tashmoo.  The Titanic's reign lasted for four days.  The Tashmoo sailed for 36 years.

By the end of the nineteenth century, steamship lines on the Great Lakes were taking on another kind of passenger, the excursion boater.  Some travelers wanted luxurious transportation to the resorts that dotted the shores of the Great Lakes.  For others, the ships themselves were the resorts.

To meet that demand, the White Star Line commissioned the Tashmoo.  Launched in December of 1899 at Wyandotte, Michigan, the Tashmoo was 308 feet long and 37 feet abeam, with a gross tonnage of 1,344.

She was fitted with every luxury.  Two grand pianos graced her main salon, and expensive carpeting and polished mahogany furnished her decks.  Six hundred windows afforded passengers unobstructed views of the shore, earning the Tashmoo the nickname "The Glass Hack."

Passengers could picnic on the decks for lunch, watch the shoreline lazily pass in the afternoon, dine in "New York style" restaurants for dinner, and dance to a live band in the evening.

On June 11, 1900, the Tashmoo took on its first customers.  Within three months, she took on her first major challenge.

Races between rival steamships were exciting events.  In September of 1900, a ship called the City of Chicago won such a race, whereupon a Detroit newspaper published an article naming ten boats that it believed to be faster than the City of Chicago.

The Tashmoo was not on the list, prompting the president of the White Star Line to issue his own challenge, offering $1,000 to any freshwater ship that beat the Tashmoo.  The owners of the City of Erie accepted the challenge.

The race was to be 94 miles in length, from Cleveland, Ohio, to Erie, Pennsylvania.  Boats filled the Cleveland harbor, and spectators lined the shore. A cannon boomed, and the race was on!

The City of Erie jumped out to an early lead, but the Tashmoo caught and passed her.  Mechanical and steering problems put the Tashmoo behind again.

However, by the time the finish line was in sight, she was closing quickly.

Nonetheless, the gap was too great.  The Tashmoo finished 45 seconds behind.

The Tashmoo came to its end in 1936 when, in the course of a turn, she struck a rock.  The captain was able to bring the ship to a nearby dock so that passengers could disembark before the Tashmoo  settled in 14 feet of water.

A salvage crew accidentally raised one end of the ship too quickly, and her keel broke.

The Tashmoo would never again sail the Great Lakes waters.

The Historic Detroit website has a great feature on the Tashmoo.
Posted by John Langlois at 6:00 AM