The 1898 series of US revenue stamps entered use on July 1, 1898 after passage of the tax act a few weeks earlier.  But a major cause of the war, the destruction of the Battleship Maine, happened months earlier on February 15, setting in motion a growing war cry across the United States. 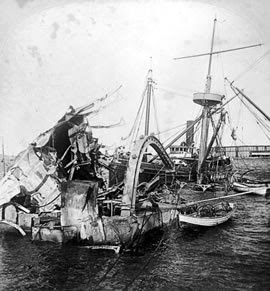 Wreck of the Battleship Maine
On February 15, 1898, the key event that set in motion the Spanish American war took place in Havana Harbour.   The sudden explosion of the Maine killed 260 American sailors and officers and sank the battleship.  The destruction of the Maine created an uproar in America, which, influenced by newspaper publicher William Randolph Hearst, immediately held Spain responsible.  Hearst's New York Journal published a story with the headline, "The Warship Maine Was Split In Two By An Enemy's Secret Infernal Machine!''
Posted by John Langlois at 12:05 AM