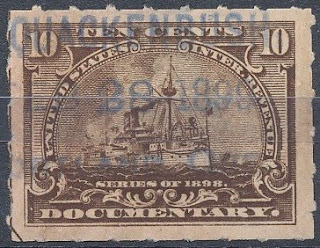 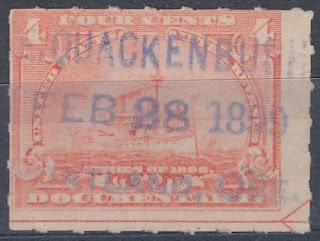 E. QUACKENBUSH
FEB 28 1899
PORTLAND, ORE.
The handstamps on the 10 and 4 cent stamps differ.  See the last letters in the name Quackenbush.  These stamps were likely used on equity transactions of some kind. 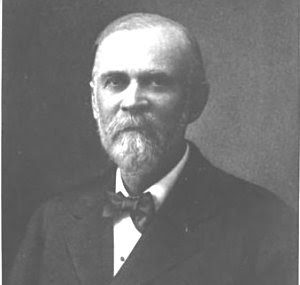 Edward Quackenbush
Edward Quackenbush would become a successful financier and community leader in Portland, but in his youth he lived an exciting and varied life.  He was a pitcher at 27 for the Portland Pioneer Baseball Club.  Before then he arrived in Portland as a well-educated New Yorker, who studied political history, composition, philosophy, English, and advanced math before dropping out of school at 15. He moved to Iowa and campaigned for Lincoln, tried to enlist in the Union army at 21 but was denied due to a heart condition, then settled out west, working at various times as a cowboy, cashier, and bookkeeper. He arrived in Portland in 1865, got a job as a bookkeeper, worked in the hardwood lumber business, became president of the Y.M.C.A., and helped establish Portland’s first telephone company, the Pacific Telephone and Telegraph Company.
Posted by John Langlois at 1:00 AM