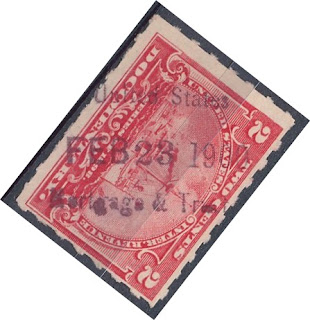 United States
FEB 23 1900
Mortgate & Trust Co.
From the book "The Story of the Trust Companies, by Edward Ten Broeck Perine:
The United States Mortgage Company, established in 1871, first undertook a trust and deposit business in January 1893.  Among the names of the incorporators are found those of J. Pierpoint Morgan, Abiel A. Low, Charles G. Landon, David Dows, and other men who were large factors in the financial and business life of the city, state, and nation.  In common with the Guaranty Trust Company, its expansion was promoted by Mutual Life interests.  After two years of operations under the old title its name was altered in 1895 to United States Mortgage and Trust Company.  The "Mortgage Company" as it has been familiarly known, has continued to carry a large line of conservative real-estate loans, place mostly in the larger cities of the West and South.
Posted by John Langlois at 1:00 AM